Sweat, Blood & Dust: the Military Career of Charles Napier during the Peninsular War & War of 1812 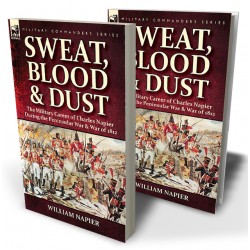 The early career of one of the Napier brothers

The Napier brothers were once known as ‘Wellington’s Colonels’ such was their renown in the ‘Old Peninsular Army’ which could ‘go anywhere and do anything’. Several young officers who served with Wellington in Spain, Portugal, the South of France and in the Waterloo campaign as staff or regimental officers went on to have illustrious military careers as senior officers in the British Army. Others found fame as politicians and diplomats. William Napier became the author of a renowned history of the Peninsular War, whilst brother James became commander in chief of the British Army in Cape Colony. Early promotion eluded Charles Napier, though he was acknowledged to be a fine soldier of extraordinary intellect and insight. Much against his inclinations he served ultimately in India where he annexed the province of Scinde after a short but brilliantly managed campaign. This book, however, does not feature the military life of Charles Napier in high command. In its pages we find him at the sharpest end of war, fighting against Napoleon’s French Army in the Peninsular War as a regimental officer and in America in the War of 1812. Some of the battlefield recollections, particularly at Corunna, have rarely been surpassed in their graphic portrayal of the experience of battle in the Napoleonic era as British soldier knew it. Contains maps and illustrations not present in earlier presentations of the text.

We reached the end of this murderous lane, but a dozen of those who entered it with me fell ere we got through it. However, some shelter was found beyond the lane; for Brooks of the 4th had occupied the spot with his picquet the day before, and had made a breastwork of loose stones, which was known to me, having been there, and nearly killed the evening before, when visiting the picquet as officer of the day. The heap remained, and about a dozen of us lodged ourselves behind this breastwork, and then it appeared to me that by a rush forward we could carry the battery above; and it was evident we must go on or go back, we could not last long where we were.
Three or four men were killed at my side, for the breastwork was but a slender protection, and two were killed by the fire of our own men from the village behind. The poor fellows kept crying out as they died, ‘Oh God! Major, our own men are killing us! Oh, Christ God I’m shot in the back of the head!’ The last man was so, for he fell against me, and the ball had entered just above the poll. Remembering then that my father had told me he saved a man’s life, at the siege of Charleston, by pulling a ball out with his finger before inflammation swelled the parts, I thought to do the same, but could not find it, and feared to do harm by putting my finger far in. It made me feel sick, and the poor fellow being laid down, continued crying out that our men had killed him, and there he soon died.
This misery shook us all a good deal, and made me so wild as to cry and stamp with rage, feeling a sort of despair at seeing the soldiers did not come on. I sent Turner, Harrison and Patterson, the three officers with me, to bring them on, and they found Stanhope animating the men, but not knowing what to do, and calling out ‘Good God where is Napier?’
When Turner told him I was in front and raging for them to come on for an attack on the battery, he gave a shout and called on the men to follow him, but ere taking a dozen strides cried out ‘Oh my God!’ and fell dead, shot through the heart. Turner, and a sergeant who had been also sent back, then returned to me, saying they could not get a man to follow them up the lane. Hearing this, I got on the wall, waving my sword and my hat at the same time, and calling out to the men behind among the rocks; but the fire was so loud none heard me, though the lane was scarcely a hundred yards long. No fire was drawn upon me by this, for a French captain afterwards told me he, and others, prevented their men firing at me; he did not know, nor was he told by me, who it was, but he said, instead of firing at him I longed to run forwards and embrace that brave officer. My own companions called out to jump down or I should be killed: I thought so too, but was so mad as to care little what happened to me.
Looking then along the field, from the height of the wall, our smoke appeared to be everywhere retiring; but the French smoke was not advancing, which gave me comfort. However, it was useless to stay there, and jumping down I said to Harrison, ‘Stay here as long as you can, I will go to the left and try to make out how the 42nd get on.’ No one was to be seen near our left from my standing place near the wall; but there was some brushwood, and a ridge with a hedge on the top, which debarred further sight, and the thought came to me that instead of being foremost, we might be in line with some of the 42nd—and though the 4th had not advanced, if fifty men of the 42nd and 50th could be gathered, we might still charge the battery above us: if we failed there was a house near, into which we could force our way, and as it was conspicuous from the English position Moore would send me support.
Telling this to Captain Harrison, I went off along a lane running at right angles from the one we were in, and parallel to our position; this exposed me to the English, not to the French fire, but being armed with only a short sabre, useless against a musket and bayonet, and being quite alone, short-sighted, and without spectacles, I felt very cowardly and anxious. Pursuing my course however for about a hundred yards, I came near a French officer lying on his back wounded, and being myself covered with blood and my face smeared, for two of the killed men had fallen in my arms, my look was no doubt fierce; and though I approached him out of pity, he thought it was to kill him: his feet were towards me and as he raised his head he cried out to some comrades above him, pointing with a quick convulsive motion towards me.