The Assault on Bergen-op-Zoom, 1814: a British Army Defeat in Holland by Napoleon’s French Forces 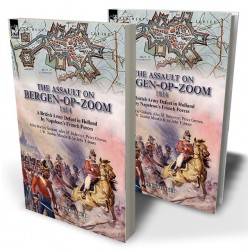 The British Army’s neglected disaster of the Napoleonic wars

For many students of the Napoleonic Age the war in the Iberian Peninsula, which came to an end with the defeat and abdication of the emperor in 1814, was followed by Wellington’s final victory over Napoleon in his attempt to restore his power at Waterloo in 1815. However, this was not a time of seamless victories for the British Army. The British general, Sir Thomas Graham had proved himself to be a courageous and able commander during the Peninsular War, notably in 1811 at the Battle of Barrosa in southern Spain where, outnumbered by the French force and abandoned by his Spanish allies, he nevertheless achieved a decisive victory. Though by 1814 he believed himself done with soldiering, Graham was reluctantly once again commanding British troops in the Low Countries where, among other duties, it fell to him to take by storm the French occupied, walled city of Bergen-op-Zoom. Although Graham’s battle plan has been acknowledged as fundamentally sound, the outcome of the assault on Bergen-op-Zoom was a catastrophic defeat at the hands of the French garrison. Perhaps predictably, little historical attention has been given to this debacle, though its details are fascinating. This special Leonaur volume has been created by drawing together the detailed eye-witness accounts of a participating soldier and of Sir Thomas Graham, together with the writings of highly regarded historical researchers, including officers of the Intelligence service and the acknowledged authority on siege-craft of the period. Included are essential maps and illustrations not all of which accompany the texts when first published.