Wellington’s Campaigns in India: Military Campaigns on the Sub-Continent, 1797-1805 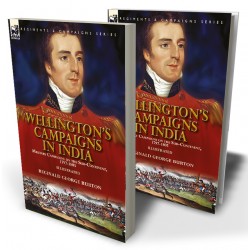 When most people consider the military genius of the Duke of Wellington it is as the commander of the British Army in Portugal and Spain during the Peninsular War and in the Waterloo campaign of 1815 when he brought to ruin the former emperor, Napoleon Bonaparte. However, Wellington (as Wellesley) learned his craft in India, commanding armies of native and British forces against the martial rulers of the sub-continent. This book chronicles Wellesley’s campaigns during the Fourth Anglo-Mysore War against Tipu Sultan which terminated in the fall of Seringapatam and the subsequent Dhoodiah Waugh insurgency. The Second Anglo-Maratha War brought him one of his hardest won victories at Assaye. This early and formative period his career earned him the rank of major-general, undoubtedly influenced his personality and honed his military capabilities—including his decisive understanding of tactics, discipline, logistics and diplomacy. In fact, these were the years that created the greatest British military figure of his age.

Wellesley at the same time moved northwards, and checked the enemy’s movements to the south, forcing him towards the Ajanta Hills. Sindhia had in the meantime been joined by his infantry and heavy guns, and the whole of the strength of the two Mahratta chieftains was now concentrated south of the Ajanta Pass near Bokardhan.
On September 21st Wellesley’s and Stevenson’s forces had converged to within twelve miles of each other, north of Jalna, and on that date the two British commanders met and concerted a plan to attack the enemy’s camp, simultaneously on the morning of the 24th. They marched on the 22nd, Stevenson by the western route by Husainabad and Wellesley round the low flat-topped hills between Badnapur and Jalna. The enemy was reported to be at Bokardhan. Acting on this information, and hearing that the Mahrattas were moving off, Wellesley moved forward from Nalni, where he left his stores and baggage on Friday, September 23rd, intending to arrive within convenient striking distance of the enemy on the following day.
But the intelligence related to the district and not to the town of Bokardhan, and, arriving on the ridge beyond Nalni, the British commander suddenly found himself in the presence of the hostile armies, which were drawn up on a tongue of land enclosed by the Juah and Kailna Rivers, their left resting on the village of Assaye, their right stretching towards Bokardhan.
It may at first sight appear that the duties of reconnoitring had been neglected by the cavalry, but it was impossible to view the enemy’s position until the main body of the army was brought up, as they were always surrounded by immense bodies of horse. Thus, it was that, Stevenson being at a distance, Wellesley found himself called upon to face the alternative of attacking an enemy over 50,000 strong with a force of some 6,000 men, or else retreating to await Stevenson’s arrival. To have retreated would have been to bring upon him a swarm of 40,000 Mahratta Horse, who would in all probability have destroyed his small force. With a determination that was a flash of genius worthy of a great commander, he at once resolved to attack, at the same instant perceiving the best mode of carrying out his intention.
The enemy’s left and centre were composed of infantry drawn up in several lines, in front of which their guns stood ready to vomit forth death upon the assailants. A dense mass of horse was arrayed upon the right, stretching away towards the west as far as the eye could reach. In front of the hostile position the Kailna River, with steep banks cut into by innumerable fissures, ran deep and swift, swollen by the rain that had recently fallen. (This is incorrectly printed Kaitna in the Wellington Despatches—and the error is repeated in all previous accounts of the battle. The present writer ascertained the correct name on the spot.) Beyond it, at a distance varying from half a mile to a mile of undulating ground, flowed the Juah River, on the hither bank of which stood the village of Assaye.
But between the hamlets of Pipalgaon and Warur on the Kailna River was a ford, which the enemy had neglected to occupy, betrayed at once to the eagle eye of the British commander by the position of the villages on either bank. He at once perceived that he could turn the Mahratta left, forcing them to change front and to confine their line to a narrow space where superiority of numbers would give them but little advantage. Covering his left front with his cavalry, and favoured by the ground, Wellesley carried out this operation successfully, the Mysore and Moghul cavalry keeping in check two large masses of the enemy’s horse which had crossed the Kailna.