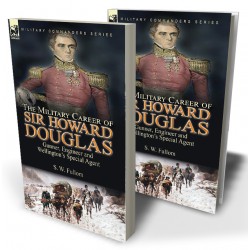 A notable British soldier of the age of Napoleon and Wellington

Douglas was commissioned in the Royal Artillery, where he served as a gunner until taking up an academic post at the Royal Military Academy, an institution with which, by virtue of his talent as a military educator, he became closely connected in several capacities. In1804 he was appointed to a majority in the York Rangers Regiment, which was disbanded shortly after although Douglas remained on its roles. Promoted to brevet Lieutenant-Colonel in 1806, he went on to serve in the initial campaign of the Peninsular War under Sir John Moore and was present at the Battle of Corunna in January,1809 (which preceded the evacuation of the British Army from Iberia) and during the disastrous Walcheren Campaign in the Low Countries. By 1812 he was once again serving in northern Spain engaged in special missions for Wellington and taking part in several minor operations in the region. However, the Royal Military Academy considered Douglas indispensable and he again became a tutor there and the author of several works of military instruction.

Sir Howard felt more scandalised at the bad gunnery, which made him tremble for the laurels of the navy; and he now conceived his scheme for introducing improvements and leavening the service with trained gunners. He looked over the guns to see how the lines were laid, and what approach was made to accuracy in allowing for the rolling of the ship, and then ascertained the different points in the disturbing effects of the motion, gathering the conclusions which formed the basis of his famous treatise.
So quick were his conceptions, that the idea of writing it flashed upon him at the same time, but did not divert him from the claims of the moment, and he went on deck to recommend a change in the mode of attack. This had been suggesting itself to Sir Home Popham, and they decided that a force from the Surveillante should take possession of an island facing the town with a carronade and mortar, and that a hundred seamen from the Venerable should land on the beach with a 24-pounder, for the purpose of breaching the redoubt. The gun might be dragged up a hill opposite the work, as the guerillas were at hand with the oxen, and Sir Howard’s forethought in suggesting this provision now struck all. The hill was of about the same elevation as the one occupied by the redoubt, and the 24-pouuder could open here, while the pieces on the island engaged the convent.
The guerillas received orders to protect the spot with a breastwork, which they promptly threw up, though opposed by a fire from the redoubt and convent, as well as from advanced parties of the enemy, posted in enclosures and the skirts of the town. A hawser was attached to the trunnions of the gun on reaching the beach, and the seamen drew it through the surf and looped it to the horns of the oxen, when the guerillas lent their aid, the sailors again gave their strong arms, and the united force ran it up the hill.
Here the seamen placed it in position, in spite of the enemy’s fire, and made good practice on firm ground, silencing the French 18-pounders, and effecting a breach before sunset. The guerillas rushed to the assault, but the French met them with the same valour, and they reeled a little, borne back by the clash. But they quickly rallied, and dashed on with cheers, disappearing in the dense smoke, which rose in clouds, and enveloped the breach. An instant more decided the struggle, and the air rang with cries as they put the defenders to the sword.
The 24-pounder turned its fire on the convent from this time, and was supported by the guns on the island, while the enemy’s advanced parties were driven in by a party of English marines firing from an eminence there, and by the guerillas. The French held out till next day, but then surrendered at discretion. Just as a party told off for storming; Sir Howard recommended the convent to be destroyed, to prevent its re-occupation, and the seamen carried out the operation under his orders, placing barrels of gunpowder under the strongest parts and blowing them into the air.
The explosion announced the event to a French column of eleven hundred men, hurrying up from Bilboa as a reinforcement, and which had arrived within two leagues. From a neighbouring height they saw the squadron sail away with the captured garrison, while the guerillas vanished, leaving them uncertain where they would appear next.
The ships came to anchor off Bermi at six o’clock in the evening of the 23rd, and Sir Howard and the commodore landed with a party of marines, and prepared to attack the fortified convent and batteries. But the French evacuated the works without firing a shot, leaving behind their ammunition and numerous pieces of artillery, with a large quantity of provisions. The food was distributed among the poor, the guns disabled, and the convent blown up.
A force from the Sparrow and Rhine landed at the same time, and captured the neighbouring post of Plencia, where they also spiked the guns and destroyed the battery and guard-houses.