The Collected Supernatural and Weird Fiction of Mrs Oliphant: Volume 1 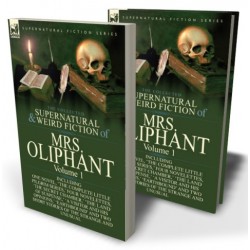 Scottish author, Margaret Oliphant belonged to a well known and highly regarded group of female fiction writers of the Victorian period. Their individual talents are undeniable, but their career paths often followed a remarkably similar pattern. Most were writers of both novels and short stories, all were prolific and able to turn their pens successfully to a variety subjects and themes. Many of them wrote regularly for the periodicals of the day, and Mrs. Oliphant (her usual nom-de-plume) frequently wrote for ‘Blackwood’s Magazine’ and specialised in the creation of tales of domestic realism, historical fiction and the genre for which she is most remembered today, ghost stories. That harshest of literary critics—and one of the finest exponents of the craft of supernatural fiction—M. R. James thought highly of Margaret Oliphant’s work in the genre, drawing particular attention in his writings on the subject to her long ghost story ‘The Beleaguered City,’ which is included in this comprehensive three volume edition of Mrs. Oliphant’s well crafted and chilling tales of the uncanny.
In volume one readers will find the novel, ‘The Complete Little Pilgrim Series,’ ‘The Secret Chamber,’ ‘The Land of Suspense,’ ‘A Visitor and His Opinions,’ ‘Earthbound’ and other haunting stories of the strange and unusual.
Leonaur editions are newly typeset and are not facsimiles; each title is available in softcover and hardback with dustjacket.