Drummond, of the 17th Lancers

Home » Drummond, of the 17th Lancers 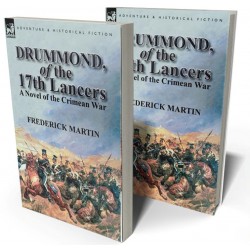 Historical adventure fiction featuring warriors or soldiers as the central characters is now incredibly popular with stories set anywhere from the world of Ancient Rome to the Viking age, and from the Napoleonic Wars to the world wars of the twentieth century. Although it was first published in 1869, in three separate volumes—combined here to create this complete Leonaur edition—this book is written in an easy contemporary style. This novel of the Crimean War was written not long after the events it portrays took place and so is reassuringly authentic in its historical detail (always essential for reader satisfaction) as well as providing a ‘good read’. Alec Drummond is a British cavalryman serving in the 17th Lancers and his adventures inevitably carry him headlong towards the legendary ‘Charge of the Light Brigade’ at the Battle of Balaclava in 1854, where the dashing light dragoon, hussar and lancer cavalry regiments of Cardigan’s command threw themselves at the destructive power of the Russian gun batteries to earn abiding fame and notoriety. This is a first rate book for lovers of historical fiction and the wars of the Victorian era. Originally published as ‘The Story of Alec Drummond of the 17th Lancers’.