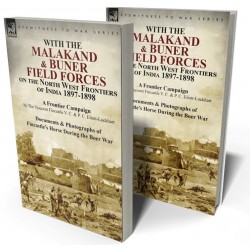 A unique edition of ‘A Frontier Campaign’

This remarkable book of military experiences on the North West Frontier of India during the last years of the 19th century was written by two young serving officers of the British and Indian armies. One was an officer of the famous Guides and the other an officer of the 16th (Queen’s) Lancers who was also acting as a correspondent for the ‘Times’ newspaper. One of them, Alexander Murray, the Viscount Fincastle won the Victoria Cross in the course of the campaign. ‘A Frontier Campaign’ is an excellent account of the Malakand and Buner Force in action, but what makes this Leonaur edition exceptional is the addition of previously unpublished material from an album which also contains the original images that appeared in the first edition. This album remains in the possession of descendents of the Viscount Fincastle (upon the death of his father in 1907 the 9th Earl of Dumore). During the Second Boer War, The Viscount Fincastle raised a volunteer yeomanry unit, The 31st Battalion Imperial Yeomanry (Fincastle’s Horse). This was a short lived regiment raised principally in the Scottish Highlands specifically for deployment in South Africa. Several rare photographs of this unit are held in the album and these have been appended to this new version of ‘A Frontier Campaign’ for the interest of all those interested in the appearance of the British Army during early 20th century.

The following day, the 16th September, was to witness some of the hardest fighting which we had yet experienced. Long before dawn, the bustle and noise of men moving about and preparing their coffee announced an early start, and shortly after reveille had been sounded, the troops fell in preparatory to marching. The force was divided into three columns: the right column, consisting of six companies 38th Dogras and a detachment of Sappers under Colonel Vivian, was directed to cross the Watelai stream, and proceed against certain Mamund villages on the eastern side of the valley; while on the left, Major Campbell of the Guides, with five companies of his regiment and two of the Buffs, had orders to operate against several villages on the western side of the valley, keeping touch with the centre column, which consisted of four companies of the Buffs, six companies of the 35th Sikhs, four guns of the Peshawar Mountain Battery, and a squadron of cavalry, the whole under command of Colonel Goldney, who had been directed to move straight up the valley.
Colonel Vivian with the left column, after having successfully captured several small villages, found himself checked by a large force of the enemy, who held too strong a position for him to attack with the force at his disposal. He therefore returned to camp, arriving there at 4 p.m., having had two men wounded during the day.
The centre column meanwhile advanced some six miles up the valley without opposition, the enemy being first reported at Badam Kila, to which place a detachment of the Buffs under Colonel Ommaney was sent to dislodge them. The remainder of the column pushed on, and about 10.30 a.m. the two companies of the 35th Sikhs leading the advance had occupied a knoll above the village of “Shahi Tangi,” which was the farthest point reached by the brigade that day, being upwards of nine miles from camp. These two companies, while advancing on Shahi Tangi, got somewhat too far ahead of their support, and were attacked by the enemy in such large numbers that they were forced to retire about a mile. This movement was carried out under great difficulties. Hampered by their wounded, many of our men were unable to return the fire of the tribesmen, who swarmed round, pouring in a heavy and disastrous fire at close quarters.
Their difficulties increased at every step, as the Ghazis, seeing their opportunity, pressed ever closer, their swordsmen charging in and cutting down the Sikhs in the ranks, seventeen being thus killed or wounded. Soon they were unable to carry their comrades, so depleted were their ranks; and Lieutenant Hughes, the adjutant of the regiment, being shot through the body, was among those left on the ground, shortly to be recovered, however, by his men and the Buffs who arrived in support.
Just as this reinforcement, took place, a squadron of the 11th Bengal Lancers under Cole dashed out, and the brilliant and opportune charge of this small handful of cavalry effectually routed the Ghazis, many of whom were speared before they could reach the shelter of the adjacent hills. From this refuge they were then ousted by the Buffs, who, driving the enemy before them, soon regained all the lost ground, the tribesmen, in their flight, leaving many dead and wounded behind them.
Meanwhile the left column, under Major Campbell, had remained on the western side of the valley some considerable distance behind, being fully occupied in destroying the defences of the numerous villages met with shortly after leaving camp. About 9 a.m. Major Campbell received a helio message from General Jeffreys to come up as soon as possible and support the Buffs and 35th Sikhs, as the enemy were appearing in large numbers from the direction of the villages of Agrah and Gat, on the northern slope of the valley. Campbell immediately collected all his companies and started off, joining the centre column about noon. Taking up a position on their left flank along the edge of a broad ravine, that officer kept over a thousand of the enemy in check. Many of these were dressed in khaki closely resembling, in the distance, the uniform of our soldiers, and were said to be Umra Khan’s men, who had their headquarters in the neighbouring village of Zagai.
Captain Birch’s battery was fully occupied all this time. When the Buffs arrived in support of the 35th Sikhs, and stormed the hill to recover the position which the two companies of Sikhs had been forced to abandon, Birch brought his guns into action above Chingai, from where he was able to do great execution among the flying tribesmen. To this position Captain Ryder and Lieutenant Gunning, with one and a half companies of the 35th Sikhs, were sent to hold the high hill on the right of the guns, and, owing to subsequent orders not reaching them, advanced up the hill farther than was originally intended.
This was shortly afterwards realised, when, at 3 p.m., General Jeffreys ordered the troops to return to camp; for the ridge which Ryder and his small party of Sikhs had occupied, and along which they now commenced to retire, slightly diverged from the line of march which the main body in their return to camp were following. Ryder soon found himself in an awkward position: isolated from the remainder of the force; hard pressed by the tribesmen; hampered by the wounded and running short of ammunition, he was soon obliged to send an urgent appeal for help.
You may also like