Sir John Fortescue’s The Clasping of the Jewel

Home » Sir John Fortescue’s The Clasping of the Jewel 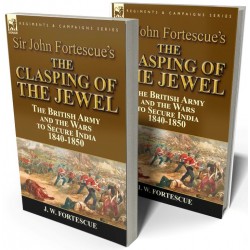 The final campaigns that placed the Indian jewel into the Imperial crown.

The British Empire’s subjugation of the Indian sub-continent had progressed inexorably from the founding of the first English trading settlement in the early 17th century. Vast regions of the country fell under the government or influence of the Honourable East India Company until the presidencies of Bengal, Bombay and Madras, their power upheld by their own native armies supported by regiments of the Crown, had all but mastered India. Few Indian states remained independent by the middle years of the 19th century. Inevitably, among their populations were strong, fiercely martial peoples including the Amirs of Scinde, the Marathas of Gwalior and, greatest among them, the Sikhs of the Punjab. The Sikh Khalsa was the best organised and armed native army which had ever opposed the British and in two momentous conflicts—the First and Second Sikh Wars—came very close to victory. This books charts the hard fought battles that brought the British geographic control of the sub-continent from Ceylon in the far south to the passes of the Hindu Kush. The catalyst—and salutary lesson—of the ‘Great Mutiny’ shortly followed, though that catastrophe led to the creation of ‘the Raj’ which consolidated India into one governable state and paved the way towards independence. Contains many maps and images not in the original text.

Smith accordingly, on the 19th, marched for Jagraon where he arrived on the 20th and picked up the Fifty-Third, which he had ordered to meet him there. The intelligence received at this place indicated that Ranjur’s force was still between Phillaur and Ludhiana, some thirty miles away, but that the enemy had occupied two forts, Baddowal, about eighteen miles to the north-east, and a little to south of the main road to Ludhiana, and Gangrana, about ten miles due south of Baddowal, and had cavalry at both places. Unwilling to give these parties the chance of annoying him on both flanks, Smith decided to move on Ludhiana by the road north , of Baddowal, and sent repeated instructions to Godby to meet him with every man that he could spare at Suneth, about midway between Baddowal and Ludhiana. Leaving all wheeled transport and heavy baggage at Jagraon under the guard of two companies of native infantry, Smith resumed his march by moonlight at half-past twelve on the morning of the 21st, and by sunrise was within two miles of Baddowal.
Here a message reached him from Godby that Ranjur had marched from the vicinity of Ludhiana to Baddowal with his whole force; and the villagers gave intelligence that his strength had been considerably increased. Smith had therefore to decide whether he would break through the Sikhs, who would certainly have prepared a position to stop him, or turn that position by a flank march and so make his way to Ludhiana. He had with him the Sixteenth Lancers, one regiment of regular and one of irregular horse, the Thirty-First, which had lost over three hundred officers and men at Mudki and Ferozeshah, the Fifty-Third, a young battalion, the Twenty-Fourth and Forty-Seventh Native Infantry, both very weak and further diminished by the two companies left at Jagraon, and eighteen guns, two-thirds of them light pieces of horse-artillery.
Ranjur was reported to have at least ten thousand men and forty guns, and he could rest one flank of his line on the fortress of Baddowal. Smith could hardly hope to force his passage through the enemy without very heavy casualties; and, if he failed, not only was he lost but Godby at Ludhiana was lost also. Rightly judging that the relief of Godby was a matter of vital importance to himself, to Gough, and indeed to British rule in India, he decided to strike south and so, moving round Baddowal at about two miles distance, to make his way thus to Ludhiana.
Changing the order of his march, so that a single word of command would wheel his force into line to the left in battle-array, he led his troops on through the deep sand; and the Sikhs speedily set themselves in motion parallel to him. Travelling on roads while Smith’s men were toiling through the sand, their column soon outstripped Smith’s, and presently they opened a heavy fire of cannon upon Smith’s infantry. A few shot fell among the transport, throwing the drivers into panic; and the Sikhs, taking advantage of the confusion, attacked the baggage-train and succeeded in carrying off a great part of it, including the sick and wounded.
At one moment Ranjur pressed more closely, but was checked by the fire of Smith’s guns, which were massed in rear; and then with great skill he drew out a line of seven battalions, with cannon in the intervals, across the rear of Smith’s column, as if to attack in earnest. Smith willingly took up the challenge, and would have assailed this line had not his infantry been utterly exhausted. The cavalry and guns were therefore formed to screen the infantry, which gradually drew off in echelon of battalions until it had passed the village, Cureton manoeuvring his three regiments of horse with admirable skill to cover the movement.
The enemy dared not leave the village to encounter Smith in the open, and the column pursued its way unmolested to Ludhiana, the cavalry not coming in till 4 p.m., after sixteen hours under arms. The day had been intensely hot, and the fatigue of the infantry was such that many men were brought in on the horses of the troopers, or dragged into camp clinging to their stirrup-leathers. Some four hundred were missing, including those who had fallen in action, and though some two hundred straggled in during the next day or two, there was no doubt that the sick and prisoners would most of them be murdered. Altogether the men were disheartened and dispirited by the result of the day’s work. (See Reynard’s History of the Sixteenth Lancers).
Meanwhile not a sign had been found of Godby. He had been very urgent in his cries for relief, but had not held his troops ready for action; and on receiving Smith’s instructions, he seems to have been slow and supine, for he did not move off until the firing began, and then, not knowing of Smith’s change of route, took the wrong direction, ultimately returning to Ludhiana without firing a shot. However, after all Smith had effected his junction with him, and moreover, now lay across Ranjur’s direct line of communication with Phillaur, compelling him to rely on a ford further down the Sutlej. Smith gave his men a day’s rest, making every preparation to attack Ranjur at Baddowal; but Ranjur with sound judgement evacuated the place and marched northward towards the river, to meet reinforcements which were on their way to him.
Books from this set
You may also like