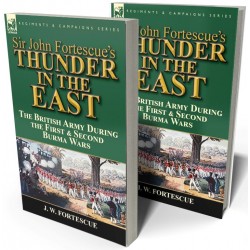 As the British Empire’s influence spread throughout India, it found itself in conflict with native states of martial peoples who frequently proved themselves capable of effectively bringing the British to battle. By the early 19th century a war had been fought against the Gurkhas in Nepal in the north-east, and within a decade another threat arose beyond the frontier in the south-east. The Burmese Empire of the period had a long history of successful warfare to its credit so encroachment on territories in India by the Burmese was inevitably taken seriously and resulted in a military expedition to Burma to settle the matter in 1824. British and Indian forces found that they were opposed by an army with competent military commanders, which quickly built effective defensive positions whenever it halted. Bamboo stockades were surprising resilient to artillery fire, and inhospitable jungles hampered the invader and favoured the Burmese who knew the terrain intimately. Tropical diseases were also rampant and killed huge numbers of British and Indian troops more effectively than combat. In open battle, and supported by the Royal Navy, the British prevailed. However, British recognition of their inability to sustain a sufficient presence in Burma to guarantee good order, and the acknowledgement of the difficulties of campaigning in such an inhospitable environment, led to an inconclusive outcome. This inevitably led to, future troubles and the outbreak of the Second Anglo-Burmese war in 1852. Contains maps and images not present in the original text.

The mere labour of hauling heavy guns along marshy tracks at the rate of about four hundred yards an hour must have sufficed to send scores of the British to hospital, especially after exposure in their exhausted state to a night of incessant tropical rain. Moreover, it was found that—as might have been guessed, or at any rate ascertained by experiment—round shot produced little effect upon so elastic a substance as bamboo, the fibres merely expanding to allow for the passage of the ball and closing immediately behind it.
Hence a battering which would have dashed masonry to ruin made a very poor breach in a stockade. Shell was far more efficacious, both in its moral and physical effects, and a few light mortars were therefore worth the trouble of their transport; but the true weapon against stockades, held by such an enemy as the Burmese, was the scaling-ladder. Campbell had plenty of scaling-ladders on the 10th, and, if he had depended chiefly upon them, he would have reached Kemmendyne in infinitely less time and with infinitely less exertion, would have stormed it out of hand, inflicted real loss on the Burmese, and put his men under cover of the huts within the stockades for the night. As things were, he inflicted upon his troops much unnecessary fatigue and exposure—far more costly in the long run than a well-planned assault—and left them with the mortifying impression that they had been outwitted and befooled.
The acquisition of Kemmendyne was, nevertheless, a solid gain, for it gave the British force at least some ground outside the line of its picquets at Rangoon; for, together with the actual town, an almost continuous chain of stockades, extending along the river for nearly a mile above the city, had been abandoned by the enemy. Kemmendyne itself was garrisoned by a native battalion and four companies of the Hundred-and-Second; and an unfortunate detachment of the latter regiment was also posted in the first stockade captured on the 10th. As has been told, nearly one hundred and fifty Burmese had been killed in it; but no pioneers were left with this detachment, nor was a single tool supplied to them to bury the dead. They were fain to burn or inter the corpses as best they could.
The rain soon washed away such slight layer of earth as they had been able to throw upon the bodies; and the troops were left to share the stockade with an unspeakable mass of corruption,(Butler). The result was, of course, an increase of sickness, of which there was already more than enough. Indeed, the only excuse for such scandalous neglect seems to be that all departments of the army were more or less paralysed by the excessive prevalence of disease.
The Burmese leaders were evidently well aware of this state of things, for the court of Ava now directed that a general attack should be delivered upon the British lines, and that the invaders should be driven into the sea. The Burmese were probably hastened to this resolution by the capture of Kemmendyne, which was the first indication that their tactics, however successful so far, might fail of their final purpose. They began to resume their old habits of harassing picquets and murdering sentries; and at the end of June large bodies were seen crossing above Kemmendyne from the western to the eastern bank of the river.
On the night of the 25th they floated down a huge fire-raft, consisting of thirty or forty canoes linked together and piled up with faggots, which had been soaked in crude petroleum, for the destruction of the British shipping; but this formidable engine of attack drifted ashore and burned itself out long before it reached Rangoon; and the naval commanders, once aware of this danger, anchored beams in the river to intercept any future fire-rafts. On the 1st of July the expected assault was delivered with such feebleness that it was beaten off easily by three weak companies of sepoys and two guns. The British, in fact, suffered not a single casualty.
Still the enemy’s force continued to increase, and Campbell, though the monsoon was at its height and much of the country was under water, decided to assail a strongly fortified Burmese post at Pagoda Point, the junction of the Hlaing with the Rangoon River. The main entrenchment was here thrown up on the tongue of land between the two streams; and the access to it was protected by two stockades on either bank of the Rangoon River about half a mile below the confluence.