The Collected Supernatural & Weird Fiction of Mrs G. Linnaeus Banks and Mrs Alfred Baldwin: Through the Night &The Shadow on the Blind and Other Stories Twenty-Four Short Tales to Chill the Blood

Home » The Collected Supernatural & Weird Fiction of Mrs G. Linnaeus Banks and Mrs Alfred Baldwin: Through the Night &The Shadow on the Blind and Other Stories Twenty-Four Short Tales to Chill the Blood 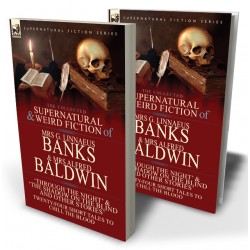 Among the many authors who practised the craft of the ghost story during the Golden Age of the genre during the nineteenth century several of its finest exponents were women. Ironically, some of those writers who most successfully brought their fictional horrors shrieking into the drawing rooms of their readers were gentlewomen, whose names appeared on their works using the reserved and formal appellation, ‘Mrs’. This special Leonaur edition contains the collected works of two of these talented authors, Mrs. G. Linnaeus Banks and Mrs Alfred Baldwin. Isabella Banks was a prolific author as well as a wife and a mother to eight children. Her most notable work was ‘The Manchester Man’, a highly regarded social commentary concerning the northern working classes of England. Her excellent supernatural tales collected here include ‘Wraith-Haunted’, ‘Pipers Ghost’, ‘A Dour Weird’ and many others. This substantial volume of the other worldly also includes the collected works of Louisa Baldwin. An invalid, Louisa Baldwin, mother of the British Prime Minister, Stanley Baldwin, loathed idleness and was a prodigious author. ‘The Shadow on the Blind’ included here, is, perhaps, her most highly regarded short story, though the nine other tales in this book equally demonstrate her fine literary skills.