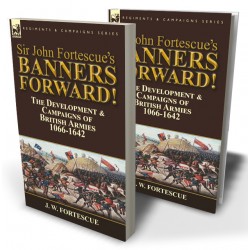 The British Army, in a form recognisable today, emerged during the reign of Charles II, when the first regiments of the Crown, differentiated by names and numbers, were created. The immediate progenitor of that army was Cromwell’s incomparable, ‘New Model’, though that remarkable force evolved in consequence of the English Civil War in response to the existing tactics and the form of the combatants. Each army and each soldier was the product of developments in the waging of war and the experiences of the campaigns of the past. In this book Fortescue examines the rise and development of the British soldier from the earliest period to the outbreak of the English Civil War. From the Norman Invasion to the wars of Edward III, and from the innovations of the Renaissance to the fascinating period of the Tudors, when Elizabeth I’s volunteers fought to liberate the Low Countries from Spanish occupation, this is an essential account of over 600 years of warfare as it was experienced by the fighting men of a small nation that was destined to become an imperial giant.