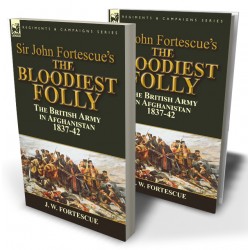 An outstanding analysis of The First Afghan War

Almost every student of the British Empire at war during the 19th century knows that the army that marched to Kabul, to secure the unpopular Shah Shuja on the throne of Afghanistan, was annihilated. Much of the blame for that debacle has fallen—quite unjustly according to Fortescue—upon the shoulders of Elphinstone, the ill-fated commander. Although The First Afghan War was a notorious blunder of cataclysmic proportions, Fortescue’s perspective on it will be a revelation to many readers. The war began as a conflict instigated by the British, over an unnecessary issue that was never in contention, against a leader of his people who was broadly amenable to British objectives. The conduct of the war, fought over the most hostile terrain populated by a fierce, resourceful enemy, disintegrated through mismanagement, incompetence, double dealing and treachery, into a humiliating defeat for British arms and prestige in India. Fortescue’s scathing assessment of the roles of civil servants and political officers, including Burnes, McNaughten and others, is an insightful appraisal of the consequences of the subversion of the authority of military officers by civilian appointed powers in a theatre of war.

More trouble was at hand above the Bolan Pass. The post at Kahan, useless and isolated, was in need of supplies, and on the 12th of August a convoy of twelve hundred camels and half as many bullocks started from Sukkur to re-victual it, escorted by five hundred infantry and three howitzers under the command of Major Clibborn. The heat was appalling, but, the marches as far as Pulaji being accomplished at night, the troops suffered less than might have been expected. From that point the difficulties of the track through the mountains compelled all movements to be made by day, and the escort was strengthened by the addition of two hundred sabres. On the 31st of August the convoy reached the foot of the ascent to the Nafusk pass at 10 a.m., having taken eight hours to cover seven miles. So far it had been unmolested; but the heat of the morning had been overpowering, and both men and cattle were suffering from want of water.
Misled by his guides, Clibborn determined to force the pass, which was occupied by tribesmen, and push on to water on the side of Kahan; and at 2 p.m. two companies and fifty dismounted troopers, covered by fire from the howitzers, advanced to the attack. The road had been destroyed, and breastworks and other obstacles had been thrown up by the enemy, but these were carried, not without loss; and the assailants reached the crest of the ridge triumphant, but disordered, breathless and spent by heat and thirst. The Baluchis seized the moment to counter-attack, and cut down the storming-party right and left. The supports fell back in panic upon the main body, and the Baluchis made a gallant attempt to overwhelm the whole force. But the main body stood firm, and their musketry, added to the steady fire of the guns, swept the tribesmen back with heavy loss to the crest of the pass. They retreated, however, no further, and Clibborn’s men were so much exhausted that pursuit was out of the question.
The distress of the troops from thirst was such that Clibborn was fain to send parties in search of water, which was found within a mile and a half of his position. But instead of marching to it with all his force, Clibborn sent only his water-carriers and the gun-teams, with an escort of irregular horse. Having with them no infantry, these were easily dispersed by the Baluchis, and thus all the water-vessels were lost. The news reached Clibborn at sunset, but still he hesitated to march to the water, and finally at 10 p.m. he decided to retreat, abandoning guns, stores and convoy; uncertain whether even so he might not have to fight his way through fresh bands of enemies. Having spiked his guns and taken a few camels to carry his wounded, he slunk away quietly at 11 p.m., and, passing over the scene of Clerk’s disaster without opposition, reached water.
There, however, the Baluchis overtook the rear, cutting up numbers of camp-followers; and only after a sharp engagement with the rear-guard were they beaten off. When morning broke Clibborn found that he was without provisions of any kind. He had ordered the sepoys to carry four days’ flour, but they were too much fatigued to obey. He was therefore obliged to make a forced march of fifty miles to Pulaji, which was fatal to many of his men. His casualties in action alone numbered two hundred and seventy, so that his total loss must have amounted to over two hundred sepoys dead, besides the whole of his bullocks and over one thousand camels lost.
Brown, thus left in hopeless isolation at Kahan, still showed so bold a front that on the 23rd of September the Marri chiefs offered to let him march away unmolested if he would give up the fort; and accordingly on the 28th Brown marched out. Though his sick numbered forty, and the men who could march were weak and faint from hunger, he brought away not only every man but also his gun, and after three days of exhausting march came safely on the 30th into Pulaji.
Such a mishap as Clibborn’s following upon the previous misfortune of Clerk was alike serious and discreditable. The Marris altogether had actually destroyed at least five hundred sepoys and carried off over seventeen hundred camels and six hundred bullocks, and all because an ignorant civilian had chosen to place a garrison in a post where it was absolutely useless. A court of inquiry condemned Clibborn and all the superior officers who had been responsible for sending him out; and it does not appear that Clibborn’s handling of his command was altogether happy.
But it is easy to condemn an officer after the event, not so easy to imagine his difficulties in passing an unwieldy convoy over sixty to seventy miles of appalling country, at the rate of one mile an hour, with a burning sun overhead, rocky hills baked into a furnace all round him, men and animals frantic from thirst, and a wary and bold enemy lying in wait to take advantage of every weakness and every false step. All present testified at least to Clibborn’s unshakable courage and self-possession throughout.
The man really responsible for these disasters was Ross-Bell, and the Supreme Government at Calcutta, arriving at this just conclusion six months after the event, passed upon him the gravest censure. But the worst offender of all was that same Supreme Government, with the governor-general at its head, which had initiated and upheld the system of placing civilians in charge of military operations.
Books from this set
You may also like