Blaise de Monluc: A Soldier of France During the Habsburg-Valois War & Wars of Religion, 1521-74

Home » Blaise de Monluc: A Soldier of France During the Habsburg-Valois War & Wars of Religion, 1521-74 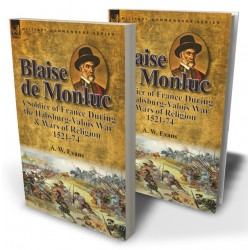 Monluc’s memoir is one of the best known, most valuable and highly regarded insights into the warfare of the 16th century written by someone who participated in it in full measure. Born in 1502 in Gascony, Monluc served France for over fifty years. This consummate warrior, first served as an archer and man-at-arms in Italy under the captaincy of the redoubtable Bayard. His performance at The Battle of Ceresole in 1544, during the Italian wars between France and Spain, allied to the Holy Roman Empire, earned him a knighthood. From this point on, though he lacked patronage, his personal merits began to be recognised and his defence of Siena in 1555 secured his reputation as a soldier and commander of the first rank. A staunch Royalist he was active throughout the Wars of Religion, and in 1574 Henry III made him a marshal of France. This fascinating memoir takes the reader to the sharp end of warfare of the period, for Monluc, who was frequently wounded, rarely shied away from the heart of the action. This memoir—part first hand account and part history—reveals a fierce and formidable military man at war during the Renaissance, making this book essential reading for any military history student of the period. The text of this Leonaur edition has been re-crafted to make it more readily accessible to modern readers.