Anglo-Zulu War of 1879: Illustrated with Maps of the Campaign—The History of the Zulu Campaign by Waller Ashe and E. V. Wyatt Edgell with a Short Historical Record of the 17th Lancers or Duke of Cambridge’s Own During the Zulu War by J.W. Fortescue

Home » Anglo-Zulu War of 1879: Illustrated with Maps of the Campaign—The History of the Zulu Campaign by Waller Ashe and E. V. Wyatt Edgell with a Short Historical Record of the 17th Lancers or Duke of Cambridge’s Own During the Zulu War by J.W. Fortescue 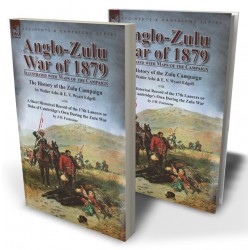 A cavalry officer’s view of the Anglo-Zulu War

There are several comprehensive histories of the Zulu War written during the time it was being fought or completed shortly after the cessation of hostilities. Whilst this book is one of them, several considerations make it exceptional. One of the authors was a serving cavalry officer in the campaign and so in addition to his reports of incidents based on his own personal experience much of his information came from reliable and candid conversations and interviews with fellow officers whilst the campaign was underway. This has resulted in the inclusion in this book of much detail concerning equipment, logistics, fortification measures etc. which has been overlooked by other reporters as potentially uninteresting to civilian readers. These matters were, of course, of every day importance to those who were dealing with them and this valuable information has been included here for military history students and posterity. Reports of actions are also finely drawn as a consequence of a thorough understanding of conditions in the field from a soldier’s perspective. The account of the disaster on Hlobane mountain is particularly interesting and well formed. Wyatt Edgell, the ‘on the spot’ reporter was sending information back to England for the penmanship of Waller Ashe to craft into this book. Wyatt Edgell was an officer in the 17th Lancers and was, in fact, tragically killed at Ulundi. So this Leonaur edition also includes a brief history of the 17th Lancers during the Zulu War and additionally benefits from the inclusion of illustrations and battlefield maps which were not included with any of the original texts.

The firing was almost continuous, and the yells of the savages were re-echoed back by the loud and heart-stirring cheers of their gallant comrades, who had seen Wood’s column coming and gave them this encouragement. It was not long before they came under more direct fire, and at this juncture Colonel Wood, who had been keeping his men cool and steady by his own presence of mind and good-humoured encouragement, left Colonel Russell in charge, and jumping upon his horse, as the ground was now practicable for riding, trotted through the skirmishers, and, closely followed by his staff and escort, pushed rapidly to the front.
This party, with a dozen of the Border Horse, galloped to within a hundred paces of the summit of the cliff, where they saw that they were in the thick of the fire, raining upon them both from front and flank, and proceeding from a mass of Zulus skirmishing in the most artistic and workmanlike manner from their caves, crevices, and enormous boulders which formed the natural fortifications of the mountain plateau. At this moment Weatherly, with his gallant and noble-hearted boy, aged only fifteen, and who insisted on fighting by his father’s side, were cheering on their men, dashing boldly into the caves, and closing in mortal strife with the Zulus.
“Take a dozen men over to the cave to the right front, and rattle out the fellows who are firing so well, Colonel Weatherly,” said Colonel Wood, as his horse staggered under him from a deep assegai wound in the chest, and a savage from behind a boulder fired at that officer at ten paces’ distance. The bullet missed him, and Llewellen Lloyd, seeing the man loading quickly again, at once rode to cut him down, and was shot through the head. Wood, seeing this officer fall, dashed spurs into his wounded horse and galloped up to catch him, closely followed by Ronald Campbell. Two other Zulus from the cave now fired simultaneously at the colonel, whose horse at this moment was again struck, and fell upon him. The colonel was upon his feet in a moment, and assisted Captain Campbell and his orderly to carry Lloyd’s body to a ledge more out of the way. The shot which killed poor Llewellen Lloyd tore Colonel Wood’s sleeve underneath his arm before reaching its mark.
As Colonel Weatherly’s men were engaged with several Zulus at close quarters, some little delay occurred in their advance upon the cave, whence the fire was most galling; and Ronald Campbell, calling on Lysons and some of the escort to follow him, dashed at the opening, having first cleared a sort of breastwork at the entrance. Poor Campbell fell, shot through the head; and Lysons and a brave fellow, Corporal Fowler, following closely upon the footsteps of the brave young guardsman, killed the two remaining Zulus within the cave, while another, severely wounded, managed to crawl away through a narrow crevice in the rock. Having ascertained that the enemy were retreating before Buller on the summit. Colonel Weatherly was sent to make a small circuit lower down the cliff, to endeavour to hit off the path by which the former had so successfully ascended, and which the others were unfortunate enough to miss.
Buller, in the meanwhile, was not only driving the Zulus’ cattle before him, but was able to assist his comrades by his fire from his vantage-ground above. The enemy in front and flank retired, disputing every available spot, while Weatherly was most skilfully working round to their left rear. His disposition of his men was most judicious, and he rendered very material help to Wood’s portion of the force, intercepting and driving back a strong party which were coming up to assist the body they were engaging. These, however, eventually took up a formidable position in some caves in a deep kloof, from which they kept up a constant and dropping fire.
Amongst Wood’s party they had up to this time but few casualties, though the loss of such splendid and noble-hearted soldiers as Campbell and Lloyd was a terrible blow to their chief, whose right hand men they were. Colonel Wood, in spite of the galling fire still maintained by the entrenched Zulus, assisted the party told off to carry the bodies of the dead to a place about half way down the first hill, where, in disregard of the bullets which kept rattling round, these noble young heroes were buried in a soldier’s glorious grave, the funeral honours being discharged over them by the rifles of friend and foe.
You may also like