The Bulwark of Christendom: the Turkish Sieges of Vienna 1529 & 1683—The Sieges of Vienna by the Turks by Karl August Schimmer & The Great Siege of Vienna,1683 by Henry Elliot Malden with an extract from The Life of King John Sobieski

Home » The Bulwark of Christendom: the Turkish Sieges of Vienna 1529 & 1683—The Sieges of Vienna by the Turks by Karl August Schimmer & The Great Siege of Vienna,1683 by Henry Elliot Malden with an extract from The Life of King John Sobieski 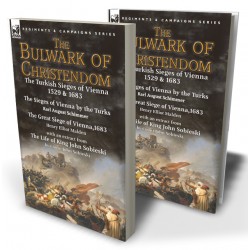 The battle between the Islamic east and the Christian west raged for centuries. Its principal battleground was eastern Europe and upon the waters of the Mediterranean Sea. Western Europe was distanced from the fray, perhaps to the extent that its people rarely understood the sentiments of those who lived and fought on the perennial front line of a conflict which had the potential, if unchecked, to overwhelm every European nation. The conquering armies of the crescent banner frequently swept westward, but it was in Austria, before the walls of Vienna, that the machinations of Ottoman sultans were eventually confounded. The city was besieged on two notable occasions, both of which are graphically recounted in the pages of this book. This city, which became emblematic of music and romance in later, more peaceful times, was the bastion that hurled back the Turks from the West. On the second occasion Vienna was surrounded in 1683, John Sobieski, King of Poland, earned immortal fame after rescuing the besieged garrison by charging into the Turkish encampment at the head of his winged hussars. The dramatic story of that momentous action provides a riveting account which is also included in this unique Leonaur edition.