With the Spanish Against Napoleon: the Peninsular War experiences of a British Officer

Home » With the Spanish Against Napoleon: the Peninsular War experiences of a British Officer 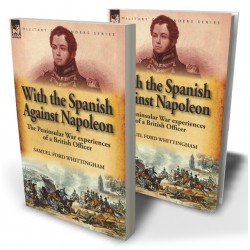 Given the number of British troops involved in the Peninsular War it is, perhaps, unsurprising that there are many accounts and histories of the war in Spain and Portugal from a British perspective. The Duke of Wellington, one of greatest military figures in British history, became famous in Iberia and his success there helps give the impression that the war was a ‘British Affair’. Spain itself fought a war of pitched battles and guerilla actions to liberate itself for which British writers have, in general, been inclined to give it little credit. On the battlefield, the Spanish occasionally prevailed, but mostly fared little better than the armies of other European nations against Napoleon’s French forces. This book focusses on the war Spain fought against Napoleon and the principal character of this book, whose fascinating career appears regularly in histories of the war. Samford Whittingham was a liaison officer with the Spanish Army. He was present with Spanish forces during several of its most notable engagements. He also trained and led a superb body of Spanish troops on the British model, ‘the Majorca Division’, which became highly regarded by Wellington. Whittingham was present at Buenos Ayres during the disastrous South American venture, at Medellin, Talavera (where he was wounded), Barrosa, and Castalla making this account, especially concerning the campaign in Andalusia and upon the Spanish eastern flank, essential for all students of this war who require a broader understanding of its less reported theatres.

On my return from Seville, I was attached to the corps d’armée under the Duke of Alburquerque in La Mancha, where we had many affairs of cavalry, as the duke had under his command 3,500 horse and two troops of horse artillery.
At Mora, the French had a detachment of 600 cavalry. The duke advanced to surprise the post with 1,500 horse. We bivouacked a few miles from their outposts without being discovered; and before daylight we were upon them. The surprise was complete. They lost 160 men, and fled at full speed.
Amongst the foremost of the pursuers was a servant of mine, a young Irish lad, named Charles, whom I had dressed up as a hussar. He fixed his eye upon a well-dressed middle-aged man, well mounted and apparently well fed. Charles was satisfied that he would turn out a good prize. Both horses were excellent; and both were urged to the top of their speed by the pursuer and the pursued. But my hussar had the advantage of a lighter weight, and was gaining fast upon his adversary, when the Frenchman turned round upon his saddle, and fired a pistol at him; which was soon followed by a second shot.
Both shots, however, missed their object, and the old soldier was reduced to his last shift, which was, however, a good one. Judging from the appearance of his pursuer that his object would be plunder, he drew a knife from his pocket and cut the straps which fastened his portmanteau. The portmanteau then fell to the ground, and Charles immediately reined up, and secured his prize, which contained a brace of pistols and a good stock of clothes.
Amongst the variety of incidents of this exciting day, an occurrence took place which we all deeply lamented. A remarkably fine young woman, apparently about seventeen or eighteen years of age, was making her escape from Mora in an open carriage, belonging to the French general commanding. Some of our cavalry attempted to arrest her progress. She immediately fired a pistol at the nearest soldier, and in return received from him a coup de sabre which almost divided her head from her body. In a moment she was stripped with that dexterity peculiar to soldiers, and her body left on the road.
On our return to Mora, we were quartered in the house of the Countess de ——, whose previous guest had been the French general commanding. The enthusiasm of the lady was beyond description. She thanked the Blessed Virgin for her miraculous escape from perdition, and declared her determination to avail herself of the happy opportunity of returning to the paternal house, which our arrival afforded. Her gratitude to Heaven and to us knew no bounds. Orders were immediately given to pack up all her plate and jewels. A splendid dinner was prepared by the major-domo. The only carriage in the place and six mules were employed by the duke’s order for her conveyance, and the hour of departure was fixed for four o’clock on the following morning.
Our party consisted of the Duke of Alburquerque, Alava, (afterwards General Alava—a favourite of Lord Wellington and on his personal staff—eventually Spanish ambassador in London about thirty years later), and myself. The duke retired to rest at nine. But I felt uneasy that our departure should have been put off till the morning, and I submitted to Alava that it was always a point of honour with the French to return a surprise with the least possible delay.
I added that their force in cavalry and horse artillery in our immediate neighbourhood was very considerable; and that to effect our retreat, we must pass through a long and narrow defile, which commenced at the entrance of Mora, and that, if attacked during the passage, confusion and complete defeat would be the inevitable consequences, and the duke’s character as a soldier lost. I proposed, therefore, that we should awake the duke, and submit to him the expediency of our commencing our retreat forthwith. Alava coincided in my view of our position. We awoke the general, and orders were immediately given to put the troops in motion.
The chivalrous feelings of the duke and of Alava did not permit their forgetting the perilous position of the disconsolate countess. The carriage was ordered to the door, and her servants were directed to finish the packing with all expedition. But, alas! the countess had fainted; and when she came to herself, she broke out into the most bitter lamentations against her cruel destiny. “Alas!” she exclaimed, “by this time tomorrow I shall have ceased to exist. For the French, on their return, will assuredly put me to death as a traitress and a spy. But, happen what may, how is it possible that a poor little delicate thing like me should be able to suffer the privations, the miseries, the hardships, of a camp follower? It cannot be. I am well aware of the cruel death that awaits me on the return of the French; but there is no remedy, and if my last hour is come, it is better for me to die in my own house and bed than in the fields!”
A more complete humbug I never saw! Thus ended a comedy worthy of Camilla and Don Rafael; and the countess, laughing secretly at the simplicity of our hearts and heads, dedicated herself forthwith to the preparation of an excellent breakfast for the French general on his return.
Our accelerated retreat was fortunate. We had scarcely cleared the defile when our rear-guard was attacked.
You may also like