Königgrätz: 1866: the Epic Conflict of the Seven Week’s War between Prussia & Austria—The Campaign of Königgrätz by Arthur L. Wagner with a Short Illustrated Account of the Battle of Königgrätz by Charles Lowe

Home » Königgrätz: 1866: the Epic Conflict of the Seven Week’s War between Prussia & Austria—The Campaign of Königgrätz by Arthur L. Wagner with a Short Illustrated Account of the Battle of Königgrätz by Charles Lowe 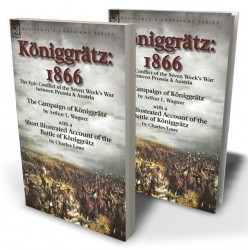 A pivotal engagement in the formation of modern Europe

This book contains two accounts—one substantial, the other concise and illustrated—describing the Battle of Königgrätz (sometimes known as The Battle of Sadowa) which was the principal land engagement of the Seven Weeks War (also known as the Austro-Prussian War) fought in early July of 1866. The outcome was a decisive victory for the Prussians who achieved success by the tactic of converging numerous units upon a concentrated point which trapped the Imperial Austrian forces between them. This war was an important stage in the process of German hegemony and departure from the longstanding influence of the Austrian Empire. It was a vital conflict in terms of European history, since it formed not only an influential step towards German unification as parts of Bavaria, Hanover and other states were annexed by Prussia, but also because it brought about the annexation of Venetia by Italy. The in depth study of this interesting campaign, by the American author of the principal work in this special Leonaur edition, contrasts the execution of the campaign with similar campaign and battlefield tactics of the civil war in America which had been concluded shortly before these events took place.