Admiral Togo and the Imperial Navy at War: Two Accounts of the Rise of Japanese Sea Power and its Finest Commander: Admiral Togo by Arthur Lloyd & The Naval Battles of the Russo-Japanese War by Kichitaro Togo

Home » Admiral Togo and the Imperial Navy at War: Two Accounts of the Rise of Japanese Sea Power and its Finest Commander: Admiral Togo by Arthur Lloyd & The Naval Battles of the Russo-Japanese War by Kichitaro Togo 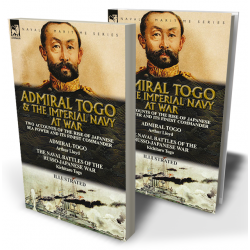 Togo Heihachiro was a gensui (admiral) of the fleet of the Imperial Japanese Navy in the early years of the 20th century. He is regarded as one of the most outstanding naval figures Japan has produced, earning him the title ‘the Nelson of the East’ from the Western press. This special Leonaur edition covers the career of Togo from his birth in 1848 to his first experience of naval conflict at the bombardment of Kagoshima, through his time as a naval student in Britain and to his early commands of small warships. Togo observed the Sino-French War of 1884-5 from the French side of the conflict and took an active part in the Sino-Japanese War of 1894-5, after which was promoted to the rank of rear admiral. In 1903 Togo was appointed Commander in Chief of the Combined Imperial Navy Fleet. It would during the Russo-Japanese War of 1904-5 that his command capabilities were fully realised, resulting in decisive Japanese victories at the battles of the Yellow Sea, at Port Arthur and at the pivotal Battle of Tsushima—which demonstrated that he was a naval strategist and commander of the fist rank. These famous events are, of course, described in some detail within these pages. The second book here was written by a nephew of Admiral Togo and describes the naval war against the Russians from the perspective of the Japanese, making it an ideal companion piece to the Togo biography. Contains illustrations and photographs not present in original editions.

The commander-in-chief was already secure of his victory, but something more than a simple victory was required to assure the safety of his country. It was essential that the Russian fleet should be so completely annihilated that further operations by sea should become absolutely needless, and that nothing more than an insignificant remnant should escape to bring the news to Vladivostok.
In his desire to accomplish this great object he had, during this battle, departed from his usual cautious custom of never exposing his ships to danger. It is true that Fortune had favoured him, and that none of his important units had been lost; but every single ship had been at times exposed to great danger from hostile shots, and more than one of them bore signs of combat on their hulls and upper works. It was this desire, too, which had induced him, in spite of the roughness of the waves, to allow his eager torpedo-craft to go forth, and continue during the night the work which his battleships and cruisers had so excellently done through the day.
The torpedo-craft were still busy with their task when the day dawned; and the battleships and cruisers began to make ready for new ventures. During the whole of the 27th the fog had been intermittent, so that the enemy were sometimes hidden and sometimes visible: the night also had been foggy, and the broken remnants of the Russian fleet had some apparent hopes of escaping safely under the cover of the friendly mist. But once more the “stars in their courses” fought against the Russian, as they did against Sisera of old: the day broke clear and fogless, and the tell-tale streaks of black smoke on the horizon revealed the whereabouts of the fugitive Russians.
Chase was at once given by battleships and cruisers alike, and by 10.30 a.m. the runaway squadron had been overtaken. These vessels proved to be the battleships Nicolas I. and Orel, the coast defence vessels. General Admiral Apraxine and Admiral Seniavin, together with the cruiser Izumrud which had at the beginning been at the head of Russian line of battle. One of these vessels, the Isumrud, made good her escape. She was found some time afterwards on the coast of the Maritime Province, not far from Vladimir Bay, where she had evidently been run ashore by her crew, who escaped with everything on board that was worth removing, leaving her battered hull alone as a lasting monument to the efficiency of Japanese artillery. The other four vessels under Rear-Admiral Nebogatoff were too much injured either to escape or to continue the tight, and surrendered to the Japanese almost without a contest.
Whilst this was going on, the Otowa and Niitaka attacked the Russian cruiser, Svietlana, and sunk her off Chuk-pyon Bay at 11.06 a.m. The destroyer Bystri which accompanied the Svietlana, was attacked by the Niitaka, (afterwards joined by the destroyer Murakumo), and destroyed some 5 miles further north, at 11.50 a.m., the survivors in both these cases being taken off by the commissioned cruisers America and Kasuga.
About 3 p.m., the Iwate and Yakumo overtook the Admiral Oushakoff, which they sunk after a short engagement. A little later, the Sasanami and Kagero, destroyers, captured the Russian destroyer Biedovi, a capture of some importance, as the Russian commander-in-chief lay wounded on her; whilst the Iwate and Yakumo, accompanied by the destroyers Asagiri, Shirakumo and Fubuki, made an attack on the Dmitri Domkoi, which was discovered the next morning sunk in shallow water off the eastern shore of Ullondo Island, her crew having escaped safely to shore where they were taken by the Japanese.
Other captures were the Sissoi Veliky, Admiral Nakhimoff and Vladimir Monomach, already mentioned. All three ships sank shortly after their surrender, as did also the Gromki destroyer, which went down at 12.43 p.m., her crew safe in Japanese hands.
You may also like