A British Soldier of the 18th Century: the Military Career of George Townshend during the War of Austrian Succession & The Seven Year’s War

Home » A British Soldier of the 18th Century: the Military Career of George Townshend during the War of Austrian Succession & The Seven Year’s War 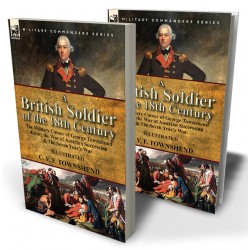 An essential insight into British battles of the 18th century

Although George Townshend, First Marquess (and ultimately Viscount) Townshend,  rose to become a field-marshal of the British Army, it is quite possible that few students interested in the warfare of the 18th century are familiar with his early military career. He first saw action at the Battle of Dettingen during the War of Austrian Succession in 1743 and he also fought at Culloden during the abortive Jacobite Rising in 1746. Townshend returned to the European battle front in in 1747 and saw action at Lauffeld. However, perhaps his principal claim to fame came about with the outbreak of the Seven Years War when he was given command of a brigade under Wolfe at Quebec. James Wolfe was killed in this famous battle and his second in command, Robert Monckton, was quickly wounded, so Townshend took command of the British Army on the Plains of Abraham in September, 1759. Townshend displayed impressive competence during the final stages of the battle averting a potentially dangerous attack. After the battle it was he who accepted the surrender of the city. After fighting at Vellinghausen in 1761 he commanded a division of Anglo-Portuguese troops during the Spanish Invasion of Portugal. All these events are described in fascinating detail and Townshend’s account of the war in North America offers particular insights into the conduct of the French and Indian War and the command qualities of James Wolfe. Contains illustrations and maps not included in earlier presentations of this text.

Colonel Carleton told Townshend that he had been round the camp and made the best disposition he could with the small force available, that he had placed the right flank on some rocky heights, thickly wooded, and the left flank rested on the Montmorency River. Townshend notes in his Journal that in this disposition the troops did not possess the heights, and the right flank was exposed to the attacks from Indians sheltered by the thick woods. Whilst Carleton was in conversation with Townshend, a message came to him to say that General Wolfe had altered the position of the camp, and that the troops were now to encamp with the wooded heights above mentioned in the rear of the left flank of the troops—the front to be towards the Montmorency River, the right flank near the Montmorency Falls. By this disposition Townshend notes:—
We should have had our front to our friends on the Isle of Orleans—our right flank to the enemy! and a pass under the Falls! and our rear open to the woods and exposed to the incursions of all the savages they chose to pass over the fords on the Montmorenci River to annoy us. However, the doubt was not long which of their two camps we should prefer—for a number of their savages rushed suddenly down upon us from the rocky woody height (this was the next morning, July 9th), drove a few Rangers that were there down to my quarters for refuge wounded both their officers, and in an instant scalped 13 or 14 of their men and had it not been for Bragg’s grenadiers who were in another barn giving to my quarters who attacked the Indians very bravely whilst some inclined round the right to surround them—they had spread confusion everywhere.
Before the grenadiers of Braggs had time to stand to their arms one was wounded at my door and the other close by it. In this situation, we remained till late in the evening, the general having placed the regiment upon that attack in companies with their front to the side the enemy could only attack us. Having no orders to entrench in the evening I thought it necessary not to leave the brigade liable to be attacked in the night and therefore in less than three hours I ran up a very good parapet with re-entering angles which covered the front of the two battalions the general permitted to front the accessible part of the country.
I fortified likewise the front by a parapet round my house a barbette for cannon which raked all the edges of that rocky height whence the Indians could before annoy us, and I may venture to say that I not only made the camp secure but unattackable. Add to this that upon the officer of artillery reporting to me that his guns where General Wolfe had ordered them to be placed, were so far advanced that he must retire them in the night, I ran out a salient angle which enclosed them—part of each face I made a barbette by which these guns raked both angles, right and left, the ground in the front of the two lines of musketry I had made.
We had no alarm this night though several Indians had been seen on this side of the River Montmorenci and not one post of light infantry was charged with the protection of the front of the camp, and the most passable part of that river. The next morning, the general having gone early to rest in the evening, I reported to him what I had done and in the evening, he went round the front and disapproved of it, saying I had indeed made myself secure, for I had made a fortress; that small redoubts were better than lines—that the men could not man these lines, nor sally out if they pleased. At the same time that he said this he had one battalion of my brigade and 2 which had arrived that morning (10 July) from the Isle of Orleans encamped upon the descent of the hill with their front to the river St. Lawrence and their rear to the rear of our 1st Line; exposed to the cannon shot of the enemy the first of which went through their tents and raked their encampment from right to left.