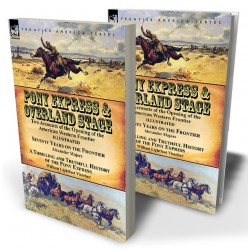 Pony Express and Stage Coach—icons of the Western Frontier

The opening of the great North American interior during the 19th century has passed into legend. This was the ‘Wild West’ and its personalities and great events have become familiar to almost everyone. This was a time of lawmen and outlaws, the U. S. cavalrymen in ‘dirty shirt blue’, the hostile tribes of feathered warriors and the cowboys of the great cattle drives. The lines of the covered wagons took pioneers across plains and deserts to create new towns, ranches and farms. The key to the success of the opening of continent for American settlers was, of course, communication. Before the building of a trans-continental railroad or telegraph lines a solution was required to quickly carry news, freight and people across this often dangerous land. This book contains two essential works on this subject. The first is the exciting life of a great American innovator, Alexander Majors, who was, with his partners, responsible for the creation of the famous Pony Express and an overland stage-coach service. The second focusses on the daredevil riders of the Pony Express who included among their number a young, ‘Buffalo Bill’ Cody.

‘There’s Injun signs about, so keep your eyes open.’ So said the station boss of the Pony Express, addressing young Cody, who had dashed up to the cabin, his horse panting like a hound, and the rider ready for the 15-mile flight to the next relay. ‘I’ll be on the watch, boss, you bet,’ said the pony rider, and with a yell to his fresh pony he was off like an arrow from a bow.
Down the trail ran the fleet pony like the wind, leaving the station quickly out of sight, and dashing at once into the solitude and dangers of the vast wilderness. Mountains were upon either side, towering cliffs here and there overhung the trail, and the wind sighed through the forest of pines like the mourning of departed spirits. Gazing ahead, the piercing eyes of the young rider saw every tree, bush, and rock, for he knew but too well that a deadly foe, lurking in ambush, might send an arrow or a bullet to his heart at any moment. Gradually far down the valley, his quick glance fell upon a dark object above the bowlder directly in his trail.
He saw the object move and disappear from sight down behind the rock. Without appearing to notice it, or checking his speed in the slightest, he held steadily upon his way. But he took in the situation at a glance, and saw that on one side was a fringe of heavy timber, upon the other a precipice, at the base of which were massive rocks.
‘There is an Indian behind that rock, for I saw his head,’ muttered the young rider, as his horse flew on. Did he intend to take his chances and dash along the trail directly by his ambushed foe? It would seem so, for he still stuck to the trail.
A moment more and he would be within range of a bullet, when suddenly dashing his spurs into the pony’s side, Billy Cody wheeled to the right, and in an oblique course headed for the cliff. This proved to the foe in ambush that he was suspected, if not known, and at once there came the crack of a rifle, the puff of smoke rising above the rock where he was concealed. At the same moment a yell went up from a score of throats, and out of the timber on the other side of the valley darted a number of Indians, and these rode to head off the rider.
Did he turn back and seek safety in a retreat to the station? No! he was made of sterner stuff and would run the gauntlet.
Out from behind the bowlder, where they had been lying in ambush, sprang two braves in all the glory of their war paint. Their horses were in the timber with their comrades, and, having failed to get a close shot at the pony rider, they sought to bring him down at long range with their rifles. The bullets pattered under the hoofs of the flying pony, but he was unhurt, and his rider pressed him to his full speed.
With set teeth, flashing eyes, and determined to do or die, Will Cody rode on in the race for life, the Indians on foot running swiftly toward him, and the mounted braves sweeping down the valley at full speed.
The shots of the dismounted Indians failing to bring down the flying pony or their human game, the mounted redskins saw that their only chance was to overtake their prey by their speed. One of the number, whose war bonnet showed that he was a chief, rode a horse that was much faster than the others, and he drew quickly ahead. Below, the valley narrowed to a pass not a hundred yards in width, and if the pony rider could get to this wall ahead of his pursuers, he would be able to hold his own along the trail in the 10-mile run to the next relay station.
But, though he saw that there was no more to fear from the two dismounted redskins, and that he would come out well in advance of the band on horseback, there was one who was most dangerous. That one was the chief, whose fleet horse was bringing him on at a terrible pace, and threatening to reach there at the same time with the pony rider.
Nearer and nearer the two drew toward the path, the horse of Cody slightly ahead, and the young rider knew that a death struggle was at hand. He did not check his horse, but kept his eyes alternately upon the pass and the chief. The other Indians he did not then take into consideration. At length that happened for which he had been looking.
When the chief saw that he would come out of the race some thirty yards behind his foe, he seized his bow and quick as a flash had fitted an arrow for its deadly flight. But in that instant Cody had also acted, and a revolver had sprung from his belt and a report followed the touching of the trigger. A wild yell burst from the lips of the chief, and he clutched madly at the air, reeled, and fell from his saddle, rolling over like a ball as he struck the ground.
The death cry of the chief was echoed by the braves coming on down the valley, and a shower of arrows was sent after the fugitive pony rider. An arrow slightly wounded his horse, but the others did no damage, and in another second Cody had dashed into the pass well ahead of his foes. It was a hot chase from then on until the pony rider came within sight of the next station, when the Indians drew off and Cody dashed in on time, and in another minute, was away on his next run.”