Angels of the Battlefield: a History of the Catholic Sisterhoods During the American Civil War

Home » Angels of the Battlefield: a History of the Catholic Sisterhoods During the American Civil War 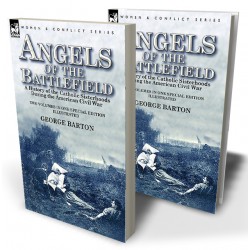 TWO VOLUMES IN ONE SPECIAL EDITION/ILLUSTRATED

It is both tragic and inspirational that those who pray for peace, when those prayers have gone unanswered, and motivated by their humanity and a willingness to sacrifice themselves, venture onto fields of conflict to administer to those who desperately need them. This book concerns the work of the Catholic Sisterhoods during the American Civil War. Catholic nuns worked among the sick and wounded on both the Union and Confederate sides, in hospitals, on campaign and even on battlefields—where some of them lost their lives while aiding others. Within these pages readers will learn of The Sisters of Mercy who were with the Irish Brigade in the West, of the Sisters of Charity of Nazareth, The Sisters of the Holy Cross and others. Here are the exploits of Sister Anthony at Shiloh and of many other nuns during famous battles of the war such as Antietam and Gettysburg. As the author points out, unlike the veterans who wore blue or grey, these sisters never held reunions after the war had ended to keep alive their memories of these terrible times, and so it was fitting that this book was written to memorialise the sacrifice and heroism of these modest women. Originally published in two volumes this special Leonaur edition has combined them for good value.

Leonaur editions are newly typeset and are not facsimiles; each title is available in softcover and hardback with dustjacket; our hardbacks are cloth bound and feature gold foil lettering on their spines and fabric head and tail bands.

One of the most important tasks of the Sisters was to write to the near relatives of the deceased, giving accounts of their last moments and delivering entrusted messages from the dying.
On more than one occasion the Sisters supplied the place of a mother to the wounded and the dying. Many a pathetic death-bed scene is still fresh in the memory of the now venerable Sisters who have survived those trying times. They were able to repress their emotions in most cases, but there were times when nature asserted itself, and the tears of compassion flowed freely. This was especially the case when drummer boys and buglers—mere children—were brought into the hospitals. In such cases all the tenderness of the Sisters’ gentle natures went out in abundance to the wounded “lambs,” as they delighted to call the young ones. One day three blue-eyed, fair-haired lads in soldier attire were brought into “hospital number one.” They were ill of typhoid pneumonia and they were in an advanced stage, too. They were placed on cots side by side and there they lay for days, uncomplaining and innocent, giving expression to the quaintest thoughts in the most childish way. They were like brothers, although they were not, and all three were of about the same height and age. The gratitude they expressed to the Sisters was more by their manner than anything they said.
One afternoon one of the three looked up at the Sister who was nursing him, and with a wistful look in his blue eyes exclaimed: “Oh, you are such a good lady; just like my mother to me.” In spite of the care that was lavished on them the three little heroes died, as so many heroes have died—unknown, unhonoured and unsung.
In the same room another lad of twelve or thirteen, whose life was fast ebbing away, cried out: “Oh, Sister, put your head right down by me and don’t leave me.” The request was complied with, and the little fellow clasped the Sister about the neck and never let go his hold until grim death relaxed it soon afterward. Who could look on such scenes unmoved! Many boys died thus. Death seemed to pluck the choicest and freshest of the earth to make its bouquets during those four fearful years. The Sisters’ care of their “lambs” after their death was as tender and reverential as it had been in life. Their eyes were closed with a prayer, their silken locks parted and their little hands folded as if in supplication to the Divine mercy. Who can doubt but what the blessings of heaven were showered upon these innocent, heroic souls?
The Sisters were “always on duty,” and sometimes the duty was more severe than at others. After great battles, such as Shiloh, the hospitals were hardly able to accommodate the hundreds that were brought there. When the orderlies had performed the first essential service for the newcomer he would be taken in charge by the Sisters.
Refreshing draughts and nourishing food were intermingled with the remedies that would be administered from time to time. The ladies of Louisville were frequent visitors at the hospitals, and they brought many delicacies for the sick and the wounded. At length near the close of the war the Sisters were recalled to their home from the Louisville hospitals. The recall came none too soon for the survivors, as they stood much in need of rest and change of air. For nearly three years they had been confined in the close wards of the three hospitals, and this not unnaturally had its effect upon their health. Many of them overestimated their strength and their powers of endurance. Some died in the hospitals, others soon after, at a premature age.
The actual number of Catholic Sisters who laid down their lives during the civil war, that their fellow-creatures might live, will probably never be known, but there is no question that hundreds did so. Their names are not cut upon any earthly monuments, but they are surely emblazoned in letters of gold in the great book of the Recording Angel. The Sisters of Charity of Nazareth, as Mother Carroll could have testified, furnished their full quota of fair martyrs. Many instances have been lost in the long number of years that have elapsed since the closing of the war, but several well-authenticated cases still linger freshly in the minds of those that were witnesses of the great struggle.
One of these is particularly pathetic. Sister Mary Lucy, one of the sweetest young members of the Order, richly endowed by nature, was one of the teachers in St, Mary’s Academy, at Paducah. When the exigencies of war compelled the temporary abandonment of this institution. Sister Mary Lucy volunteered as one of the hospital nurses. She was assigned, to some of the severest typhoid cases, and the manner in which she nursed these patients won for her the unqualified praise of the hospital doctors and attendants.