The Collected Supernatural and Weird Fiction of Catherine Crowe: Thirty-Five Short Stories of the Strange and Unusual Including the ‘Evening Tales’, ‘The Swiss Lady’s Story’, The Dutch Officer’s Story’ and ‘My Friend’s Story’

Home » The Collected Supernatural and Weird Fiction of Catherine Crowe: Thirty-Five Short Stories of the Strange and Unusual Including the ‘Evening Tales’, ‘The Swiss Lady’s Story’, The Dutch Officer’s Story’ and ‘My Friend’s Story’ 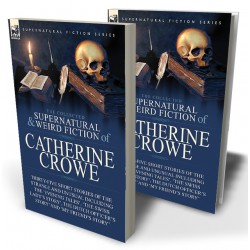 Catherine Ann Stevens was born in Kent in 1803 and in common with many English young ladies of her day and class was home educated. She married a soldier, Major John Crowe but the marriage was an unhappy one and they separated in the 1830s. By this time Catherine was living in Edinburgh and moving in literary circles which brought her into contact with Thomas de Quincey. Harriet Martineau and William Makepeace Thackeray among others. Catherine Crowe began her writing career with the typical industry of her age and produced novels, short stories and plays on a number of themes including works for children. Short stories with sensational plots frequently featuring women abused by men were published in Charles Dicken’s, Household Words and in Chamber’s Edinburgh Journal. Her literary excursions into the supernatural world were not as frequent those of several of her peers, though two notable works were produced: a collection of short stories entitled Ghosts and Family Legends, and perhaps her most popular and enduring work, the evocatively titled The Night Side of Nature, which contained a combination of fictional and allegedly ‘true’ ghost stories. Montague Summers included two of Crowe’s stories in his well-regarded anthology Victorian Ghost Stories (1936). Catherine Crowe appears to have had more than a passing interest in the supernatural. In 1854 she was discovered naked in the street claiming that spirits had rendered her invisible. She was subsequently treated successfully for mental illness, dying in Folkestone in 1876. This Leonaur edition includes all Catherine Crowe’s supernatural fiction in a single volume.