Home » Prince Eugene of Savoy: the Life of a Great Military Commander of the 17th & 18th Centuries 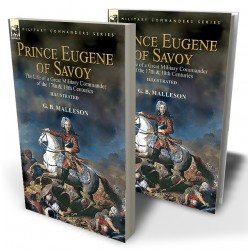