Home » Captain Bill McDonald Texas Ranger: the Account of a Famous Lawman of the South-Western Frontier 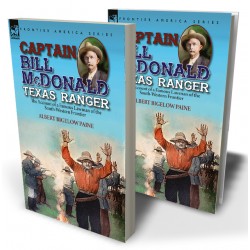