Twelve Years in the Saddle: the Recollections of a Texas Ranger on the Frontier

Home » Twelve Years in the Saddle: the Recollections of a Texas Ranger on the Frontier 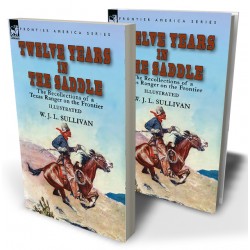 The author of this book was a Texas Ranger who served with Company B of the Frontier Battalion for twelve years, though Sullivan also tells of his experiences on the American south-western frontier in a series of riveting anecdotes which date from his younger days in the late 1860s. Aficionados of western frontier history will find much to engage them in Sullivan’s tales which are recounted in a direct authentic style. The reader will be taken on cattle drives, through Indian fights and manhunts in pursuit of bad men of every description and crime. Here are bar brawls, gunfights and hangings. The author struggles to endure all the adverse conditions that in the untamed wilderness that could send a man to an early grave. The notable Comanche chieftain, Quanah Parker, also makes a perhaps predictable appearance in these pages. This is a well-regarded book on its subject and is highly recommended. Illustrated with photographs.

While passing one group, we heard a man inquire who we were, and another man replied that we were Texas Rangers; whereupon they all laughed, some of them remarking that if we ever got three miles out of town we would never live to get back. We heard the remark, but paid no attention to it.
On the following Tuesday night someone came to the hotel where we were staying and asked the proprietor, Jim Darfmyer, if the Texas Rangers were not staying with him. Darfmyer told them that we were, and the visitor asked him to call us, which he did.
When we got downstairs, we met Nat Hartman, whose home was on the Colorado River. He seemed very anxious about something and informed us that his brother, Edd Hartman, was missing, and that he feared he had been killed. The Hartmans were members of the anti-mob faction, and Nat Hartman told us that this was the first time in nine years that his brother had been outside of his house after sundown.
We told him that we would go by and get Sheriff Howard and commence looking for his brother. Nat objected to us getting Howard. We told him that we would have to have the sheriff with us, so we went by and called for Howard, who joined us in the search.
We reached the home of Nat Hartman’s father a little before day, and just before sunrise we left Hartman’s house and started down the river, the way they claimed Edd went off the day before at one o’clock. We walked about three-quarters of a mile, and found the dead body of the man for whom we were searching, lying in the bed of the river.
We traced two men’s tracks from the body to a house, sixty steps away, where a Mr. Campbell, one of Howard’s deputy sheriffs, lived.
Campbell was out in the yard when he saw us coming, but he started in a fast walk to the house when he discovered us. We stopped him before he got very far, but he said something to his wife, who was standing in the doorway, and she whirled back into the building, returning in a second or two with something in her hand, which she held under her apron.
We were satisfied that she had his six-shooter, and we ordered her not to go near her husband. She then went back into the house. We arrested Campbell and his two sons, Meek and Dave, and five other men in his neighbourhood. We reached San Saba with them a little after dark that evening, and locked them up in a little house that Darfmyer let us have for that night. We did not let them sleep together and kept them from talking with each other, so they would not “make medicine.”
About an hour or two before day, Campbell asked me to let him get up and sit by the stove.
I told him that would be alright, and he came over and began talking to me. He ran his hand over his face and said his face was paining him. He also claimed that his mule pitched him off a day or two before that, and threw him into a rough place, bruising his face up badly. He said he couldn’t understand what was the matter with his mule; that he used to be a good mule, but had acted mighty strangely of late. He then claimed that the mule had also thrown one of his boys recently and bruised his face up considerably.
The next morning, we had all eight of the men up before the grand jury. Campbell testified before the grand jury that a little grey mare had fallen down with him in a rough place and bruised his face. Another man before the grand jury testified that a dun mare had fallen down with Campbell twelve miles further up the river. They made such conflicting statements in trying to get out of trouble that the grand jury indicted Dave Campbell and his father for the murder of Edd Hartman.
Dave Campbell jumped his bond and was caught seven years later in Arizona, where he was living under the name of “Alex Miller,” and was brought back to San Saba, but he was acquitted.
Old man Campbell got a change of venue to Fort Mason, and was convicted and sentenced to seven and a half years in the penitentiary, but appealed his case. He was tried sixteen times in eight years, and finally got off on a light sentence of two and a half years, and went to the penitentiary from Lampasas to serve it out. I had to go to court twice a year for eight years to testify in that case.
Mr. Hartman, the father of the murdered man, is now dead, but he lived to fight the case for eight long years, and finally heard the sentence read to Campbell. In fighting the case he spent every dollar he had, and sold his farm and home and stock, in order to keep up the prosecution, and when he died at the age of seventy-seven years, he was renting land. He had remained faithful to his son to the last.