The Collected Supernatural and Weird Fiction of Helena P. Blavatsky: Ten Short Stories of the Strange and Unusual Including ‘A Bewitched Life’, ‘An Unsolved Mystery’, ‘A Story of the Mystical’, ‘The Blue Lotus’ and Others

Home » The Collected Supernatural and Weird Fiction of Helena P. Blavatsky: Ten Short Stories of the Strange and Unusual Including ‘A Bewitched Life’, ‘An Unsolved Mystery’, ‘A Story of the Mystical’, ‘The Blue Lotus’ and Others 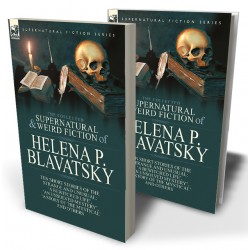 The late nineteenth century saw a rise in the number of people who became interested in the occult and among them were a few who became notable practitioners. Aleister Crowley, for example, became infamous as a member of  ‘the Golden Dawn’ and founder of the religion ‘Thelema’, and the author of this book, Russian born, Madam Helena Petrovna Blavatsky, became a proponent of Theosophy—a religion of archaic wisdom. Her most famous written work on the subject is ‘The Secret Doctrine’. Fortunately, for enthusiasts of the other worldly and supernatural fiction, Blavatsky utilised her more earnest pursuits to provide inspiration and background for some highly entertaining tales of ghosts, horrors and weird occurrences. Her single small volume of  supernatural fiction, ‘Nightmare Tales’, was published in 1892, but there remained a small number of uncollected stories published in magazines of the day. This Leonaur original collects all of these short stories as well as a chapter from her book, ‘From the Caves and Jungles of Hindostan’, which has in the past been included in anthologies of supernatural tales,  to create the most complete collection of Madam Blavatsky’s fiction ever published.