The Collected Strange & Science Fiction of H. G. Wells: Volume 5—The War in the Air & The World Set Free

Home » The Collected Strange & Science Fiction of H. G. Wells: Volume 5—The War in the Air & The World Set Free 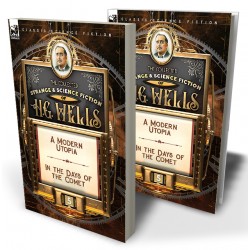 Volume 5—A Modern Utopia & In the Days of the Comet

In ‘A Modern Utopia’ (1905) two adventurers travel to a planet ‘out beyond Sirius’ to experience a society in which their own doubles exist. ‘In the days of the Comet’ (1906) a bizarre green comet enters the Earth’s atmosphere releasing a soporific fog. Upon awakening humankind has been forever changed promoting a healthy, contented and peaceful society.