The Collected Strange & Science Fiction of H. G. Wells: Volume 6—The War in the Air & The World Set Free

Home » The Collected Strange & Science Fiction of H. G. Wells: Volume 6—The War in the Air & The World Set Free 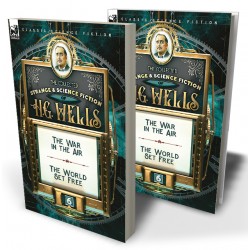 Volume 6—The War in the Air & The World Set Free

‘The War in the Air’ (1906) is a prophetic military science fiction novel that heralded the coming of the First World War and the new dimension of aerial warfare. A true worldwide war comes about as a result of a German attack on the United States of America which escalates as the Asian powers engage their own forces. ‘The World Set Free’ (1914) predicts a new incredibly destructive weapon which with hindsight suggests the effects of the atomic bomb though on a more personal scale.

It is doubtful at what particular time the unlucky Americans realised the presence of this new factor in the fight. No account now survives of their experience. We have to imagine as well as we can what it must have been to a battle-strained sailor suddenly glancing upward to discover that huge long silent shape overhead, vaster than any battleship, and trailing now from its hinder quarter a big German flag. Presently, as the sky cleared, more of such ships appeared in the blue through the dissolving clouds, and more, all disdainfully free of guns or armour, all flying fast to keep pace with the running fight below.
From first to last no gun whatever was fired at the Vaterland, and only a few rifle shots. It was a mere adverse stroke of chance that she had a man killed aboard her. Nor did she take any direct share in the fight until the end. She flew above the doomed American fleet while the prince by wireless telegraphy directed the movements of her consorts. Meanwhile the Vogel-stern and Preussen, each with half-a-dozen drachenflieger in tow, went full speed ahead and then dropped through the clouds, perhaps five miles ahead of the Americans, The Theodore Roosevelt let fly at once with the big guns in her forward barbette, but the shells burst far below the Vogel-stern, and forthwith a dozen single-man drachenflieger were swooping down to make their attack.
Bert, craning his neck through the cabin porthole, saw the whole of that incident, that first encounter of aeroplane and ironclad. He saw the queer German drachenflieger, with their wide flat wings and square box-shaped heads, their wheeled bodies and their single man riders, soar down the air like a flight of birds. “Gaw!” he said. One to the right pitched extravagantly, shot steeply up into the air, burst with a loud report, and flamed down into the sea; another plunged nose forward into the water and seemed to fly to pieces as it hit the waves. He saw little men on the deck of the Theodore Roosevelt below, men foreshortened in plan into mere heads and feet, running out preparing to shoot at the others.
Then the foremost flying-machine was rushing between Bert and the American’s deck, and then bang! came the thunder of its bomb flung neatly at the forward barbette, and a thin little crackling of rifle shots in reply. Whack, whack, whack, went the quick-firing guns of the American’s battery and smash came an answering shell from the Fürst Bismarck. Then a second and third flying-machine passed between Bert and the American ironclad, dropping bombs also, and a fourth, its rider hit by a bullet, reeled down and dashed itself to pieces and exploded between the shot-torn funnels, blowing them apart. Bert had a momentary glimpse of a little black creature jumping from the crumpling frame of the flying-machine, hitting the funnel, and falling limply, to be instantly caught and driven to nothingness by the blaze and rush of the explosion.
Smash! came a vast explosion in the forward part of the flagship, and a huge piece of metalwork seemed to lift out of her and dump itself into the sea, dropping men and leaving a gap into which a prompt drachenflieger planted a flaring bomb. And then for an instant Bert perceived only too clearly in the growing, pitiless light a number of minute, convulsively active animalculae scorched and struggling in the Theodore Roosevelt’s foaming wake. What were they? Not men—surely not men? Those drowning, mangled little creatures tore with their clutching fingers at Bert’s soul. “Oh, Gord!” he cried, “Oh, Gord!” almost whimpering. He looked again and they had gone, and the black stem of the Andrew Jackson, a little disfigured by the sinking Bremen’s last shot, was parting the water that had swallowed them into two neatly symmetrical waves. For some moments sheer blank horror blinded Bert to the destruction below.
Then with an immense rushing sound, bearing as it were a straggling volley of crashing minor explosions on its back, the Susquehanna, three miles and more now to the east, blew up and vanished abruptly in a boiling, steaming welter. For a moment nothing was to be seen but tumbled water, and then there came belching up from below, with immense gulping noises, eructations of steam and air and petrol and fragments of canvas and woodwork and men.
That made a distinct pause in the fight. It seemed a long pause to Bert. He found himself looking for the drachenflieger. The flattened ruin of one was floating abeam of the Monitor, the rest had passed, dropping bombs down the American column; several were in the water and apparently uninjured, and three or four were still in the air and coming round now in a wide circle to return to their mother airships. The American ironclads were no longer in column formation; the Theodore Roosevelt, badly damaged, had turned to the south-east, and the Andrew Jackson, greatly battered but uninjured in any fighting part, was passing between her and the still fresh and vigorous Fürst Bismarck to intercept and meet the latter’s fire. Away to the west the Hermann and the Germanicus had appeared and were coming into action.