The Collected Strange & Science Fiction of H. G. Wells: Volume 4—The Sea Lady & The Food of the Gods and How it Came to Earth

Home » The Collected Strange & Science Fiction of H. G. Wells: Volume 4—The Sea Lady & The Food of the Gods and How it Came to Earth 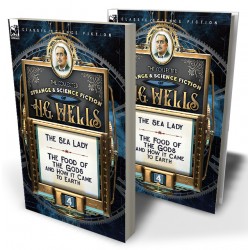 Wells’ fantasy ‘The Sea Lady’ (1901) concerns a mermaid intent on seducing a man she had seen in the southern oceans. ‘The Food of the Gods and How it Came to Earth’ (1904) tells of a group of scientists who invent a food which causes those who eat it to grow to six or seven times their normal size. Chickens, rats, plants and insects all eat the food with disturbing consequences. When human children also eat it events spiral towards disaster.

And then it seemed to Fred that a little miracle happened. There was a swirl of the water like the swirl about a screw propeller, and he gripped the Sea Lady and the ladder just in time, as it seemed to him, to prevent his being washed far out into the Channel. His father vanished from his sight with an expression of astonishment just forming on his face and reappeared beside him, so far as back and legs are concerned, holding on to the ladder with a sort of death grip. And then behold! They had shifted a dozen yards inshore, and they were in less than five feet of water and Fred could feel the ground.
At its touch his amazement and dismay immediately gave way to the purest heroism. He thrust ladder and Sea Lady before him, abandoned the ladder and his now quite disordered parent, caught her tightly in his arms, and bore her up out of the water. The young ladies cried “Saved!” the maids cried “Saved!” Distant voices echoed “Saved, Hooray!” Everybody in fact cried “Saved!” except Mrs. Bunting, who was, she says, under the impression that Mr. Bunting was in a fit, and Mr. Bunting, who seems to have been under an impression that all those laws of nature by which, under Providence, we are permitted to float and swim, were in suspense and that the best thing to do was to kick very hard and fast until the end should come. But in a dozen seconds or so his head was up again and his feet were on the ground and he was making whale and walrus noises, and noises like a horse and like an angry cat and like sawing, and was wiping the water from his eyes; and Mrs. Bunting (except that now and then she really had to turn and say “Randolph!”) could give her attention to the beautiful burthen that clung about her son.
And it is a curious thing that the Sea Lady was at least a minute out of the water before anyone discovered that she was in any way different from—other ladies. I suppose they were all crowding close to her and looking at her beautiful face, or perhaps they imagined that she was wearing some indiscreet but novel form of dark riding habit or something of that sort. Anyhow not one of them noticed it, although it must have been before their eyes as plain as day. Certainly, it must have blended with the costume. And there they stood, imagining that Fred had rescued a lovely lady of indisputable fashion, who had been bathing from some neighbouring house, and wondering why on earth there was nobody on the beach to claim her. And she clung to Fred and, as Miss Mabel Glendower subsequently remarked in the course of conversation with him, Fred clung to her.
“I had cramp,” said the Sea Lady, with her lips against Fred’s cheek and one eye on Mrs. Bunting. “I am sure it was cramp. . . . I’ve got it still.”
“I don’t see anybody—” began Mrs. Bunting.
“Please carry me in,” said the Sea Lady, closing her eyes as if she were ill—though her cheek was flushed and warm. “Carry me in.”
“Where?” gasped Fred.
“Carry me into the house,” she whispered to him.
“Which house?”
Mrs. Bunting came nearer.
“Your house,” said the Sea Lady, and shut her eyes for good and became oblivious to all further remarks.
“She— But I don’t understand—” said Mrs. Bunting, addressing everybody. . . .
And then it was they saw it. Nettie, the younger Miss Bunting, saw it first. She pointed, she says, before she could find words to speak. Then they all saw it! Miss Glendower, I believe, was the person who was last to see it. At any rate it would have been like her if she had been.
“Mother,” said Nettie, giving words to the general horror. “Mother! She has a tail!”
And then the three maids and Mabel Glendower screamed one after the other. “Look!” they cried. “A tail!”
“Of all—” said Mrs. Bunting, and words failed her.
“Oh!” said Miss Glendower, and put her hand to her heart.
And then one of the maids gave it a name. “It’s a mermaid!” screamed the maid, and then everyone screamed, “It’s a mermaid.”
Except the mermaid herself; she remained quite passive, pretending to be insensible partly on Fred’s shoulder and altogether in his arms.