The Collected Strange & Science Fiction of H. G. Wells: Volume 3—The Sleeper Awakes & The First Men in the Moon

Home » The Collected Strange & Science Fiction of H. G. Wells: Volume 3—The Sleeper Awakes & The First Men in the Moon 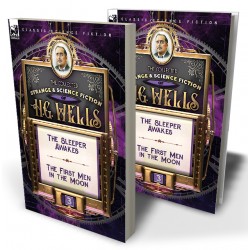 Volume 3—The Sleeper Awakes & The First Men in the Moon

In ‘The Sleeper Awakes’ (1899) a man falls asleep for over two hundred years and on awakening in a dystopian London discovers that as a result of compound bank interest he is the wealthiest man on earth. His adventures propel him to leadership of a movement fighting for liberation from tyrannical rulers. The scientific romance ‘The First Men in the Moon’ (1901) tells the fantastic story of two men who journey to the moon to discover it is populated by the Selenites—a race of insect-like alien creatures.

He sat with a gaunt stare on his face. “But why am I here? No! Don’t talk. Be quiet. Let me—”
He sat silent, rubbed his eyes, and, uncovering them, found another little glass of pinkish fluid held towards him. He took the dose. It was almost immediately sustaining. Directly he had taken it he began to weep naturally and refreshingly.
Presently he looked at their faces, suddenly laughed through his tears, a little foolishly. “But—two—hun—dred—years!” he said. He grimaced hysterically and covered up his face again.
After a space he grew calm. He sat up, his hands hanging over his knees in almost precisely the same attitude in which Isbister had found him on the cliff at Pentargen. His attention was attracted by a thick domineering voice, the footsteps of an advancing personage. “What are you doing? Why was I not warned? Surely you could tell? Someone will suffer for this. The man must be kept quiet. Are the doorways closed? All the doorways? He must be kept perfectly quiet. He must not be told. Has he been told anything?”
The man with the fair beard made some inaudible remark, and Graham looking over his shoulder saw approaching a very short, fat, and thickset beardless man, with aquiline nose and heavy neck and chin. Very thick black and slightly sloping eyebrows that almost met over his nose and overhung deep grey eyes, gave his face an oddly formidable expression. He scowled momentarily at Graham and then his regard returned to the man with the flaxen beard. “These others,” he said in a voice of extreme irritation. “You had better go.”
“Go?” said the red-bearded man.
“Certainly—go now. But see the doorways are closed as you go.”
The two men addressed turned obediently, after one reluctant glance at Graham, and instead of going through the archway as he expected, walked straight to the dead wall of the apartment opposite the archway. A long strip of this apparently solid wall rolled up with a snap, hung over the two retreating men and fell again, and immediately Graham was alone with the newcomer and the purple-robed man with the flaxen beard.
For a space the thickset man took not the slightest notice of Graham, but proceeded to interrogate the other—obviously his subordinate—upon the treatment of their charge. He spoke clearly, but in phrases only partially intelligible to Graham. The awakening seemed not only a matter of surprise but of consternation and annoyance to him. He was evidently profoundly excited.
“You must not confuse his mind by telling him things,” he repeated again and again. “You must not confuse his mind.”
His questions answered, he turned quickly and eyed the awakened sleeper with an ambiguous expression.
“Feel queer?” he asked.
“Very.”
“The world, what you see of it, seems strange to you?”
“I suppose I have to live in it, strange as it seems.”
“I suppose so, now.”
“In the first place, hadn’t I better have some clothes?”
“They—” said the thickset man and stopped, and the flaxen-bearded man met his eye and went away. “You will very speedily have clothes,” said the thickset man.
“Is it true indeed, that I have been asleep two hundred—?” asked Graham.
“They have told you that, have they? Two hundred and three, as a matter of fact.”
Graham accepted the indisputable now with raised eyebrows and depressed mouth. He sat silent for a moment, and then asked a question, “Is there a mill or dynamo near here?” He did not wait for an answer. “Things have changed tremendously, I suppose?” he said.
“What is that shouting?” he asked abruptly.
“Nothing,” said the thickset man impatiently. “It’s people. You’ll understand better later—perhaps. As you say, things have changed.” He spoke shortly, his brows were knit, and he glanced about him like a man trying to decide in an emergency. “We must get you clothes and so forth, at any rate. Better wait here until they can be procured. No one will come near you. You want shaving.”
Graham rubbed his chin.
The man with the flaxen beard came back towards them, turned suddenly, listened for a moment, lifted his eyebrows at the older man, and hurried off through the archway towards the balcony. The tumult of shouting grew louder, and the thickset man turned and listened also. He cursed suddenly under his breath, and turned his eyes upon Graham with an unfriendly expression. It was a surge of many voices, rising and falling, shouting and screaming, and once came a sound like blows and sharp cries, and then a snapping like the crackling of dry sticks. Graham strained his ears to draw some single thread of sound from the woven tumult.
Then he perceived, repeated again and again, a certain formula. For a time, he doubted his ears. But surely these were the words: “Show us the Sleeper! Show us the Sleeper!”
The thickset man rushed suddenly to the archway.
“Wild!” he cried, “How do they know? Do they know? Or is it guessing?”
There was perhaps an answer.
“I can’t come,” said the thickset man; “I have him to see to. But shout from the balcony.”
There was an inaudible reply.
“Say he is not awake. Anything! I leave it to you.”
He came hurrying back to Graham. “You must have clothes at once,” he said. “You cannot stop here—and it will be impossible to—”
He rushed away, Graham calling unanswered questions after him. In a moment he was back.
“I can’t tell you what is happening. It is too complex to explain. In a moment you shall have your clothes made. Yes—in a moment. And then I can take you away from here. You will find out our troubles soon enough.”