The Collected Strange & Science Fiction of H. G. Wells: Volume 2—The Invisible Man & The War of the Worlds

Home » The Collected Strange & Science Fiction of H. G. Wells: Volume 2—The Invisible Man & The War of the Worlds 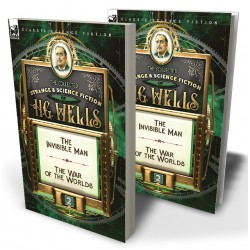 Volume 2—The Invisible Man & The War of the Worlds

‘The Invisible Man’ (1897) tells the story of Griffin, a scientist who has invented a way to become invisible, but has not invented a way to reverse the process. Given to extreme violence by nature, he becomes a stalking deadly horror. ‘The War of the Worlds’ (1897) tells the story of a Martian invasion of Earth in which giant tripod fighting machines wreak death and destruction on England. The tentacled Martians appear to be totally undefeatable by humans, but fall prey to common bacteria to which they have no immunity.

Everyone stood listening intently. Mrs. Hall’s eyes, directed straight before her, saw without seeing the brilliant oblong of the inn door, the road white and vivid, and Huxter’s shop-front blistering in the June sun. Abruptly Huxter’s door opened and Huxter appeared, eyes staring with excitement, arms gesticulating. “Yap!” cried Huxter. “Stop thief!” and he ran obliquely across the oblong towards the yard gates, and vanished.
Simultaneously came a tumult from the parlour, and a sound of windows being closed.
Hall, Henfrey, and the human contents of the tap rushed out at once pell-mell into the street. They saw someone whisk round the corner towards the road, and Mr. Huxter executing a complicated leap in the air that ended on his face and shoulder. Down the street people were standing astonished or running towards them.
Mr. Huxter was stunned. Henfrey stopped to discover this, but Hall and the two labourers from the Tap rushed at once to the corner, shouting incoherent things, and saw Mr. Marvel vanishing by the corner of the church wall. They appear to have jumped to the impossible conclusion that this was the Invisible Man suddenly become visible, and set off at once along the lane in pursuit. But Hall had hardly run a dozen yards before he gave a loud shout of astonishment and went flying headlong sideways, clutching one of the labourers and bringing him to the ground. He had been charged just as one charges a man at football. The second labourer came round in a circle, stared, and conceiving that Hall had tumbled over of his own accord, turned to resume the pursuit, only to be tripped by the ankle just as Huxter had been. Then, as the first labourer struggled to his feet, he was kicked sideways by a blow that might have felled an ox.
As he went down, the rush from the direction of the village green came round the corner. The first to appear was the proprietor of the cocoanut shy, a burly man in a blue jersey. He was astonished to see the lane empty save for three men sprawling absurdly on the ground. And then something happened to his rear-most foot, and he went headlong and rolled sideways just in time to graze the feet of his brother and partner, following headlong. The two were then kicked, knelt on, fallen over, and cursed by quite a number of over-hasty people.
Now when Hall and Henfrey and the labourers ran out of the house, Mrs. Hall, who had been disciplined by years of experience, remained in the bar next the till. And suddenly the parlour door was opened, and Mr. Cuss appeared, and without glancing at her rushed at once down the steps toward the corner. “Hold him!” he cried. “Don’t let him drop that parcel.”
He knew nothing of the existence of Marvel. For the Invisible Man had handed over the books and bundle in the yard. The face of Mr. Cuss was angry and resolute, but his costume was defective, a sort of limp white kilt that could only have passed muster in Greece. “Hold him!” he bawled. “He’s got my trousers! And every stitch of the Vicar’s clothes!”
“‘Tend to him in a minute!” he cried to Henfrey as he passed the prostrate Huxter, and, coming round the corner to join the tumult, was promptly knocked off his feet into an indecorous sprawl. Somebody in full flight trod heavily on his finger. He yelled, struggled to regain his feet, was knocked against and thrown on all fours again, and became aware that he was involved not in a capture, but a rout. Everyone was running back to the village. He rose again and was hit severely behind the ear. He staggered and set off back to the “Coach and Horses” forthwith, leaping over the deserted Huxter, who was now sitting up, on his way.
Behind him as he was halfway up the inn steps, he heard a sudden yell of rage, rising sharply out of the confusion of cries, and a sounding smack in someone’s face. He recognised the voice as that of the Invisible Man, and the note was that of a man suddenly infuriated by a painful blow.
In another moment Mr. Cuss was back in the parlour. “He’s coming back, Bunting!” he said, rushing in. “Save yourself!”
Mr. Bunting was standing in the window engaged in an attempt to clothe himself in the hearth-rug and a West Surrey Gazette. “Who’s coming?” he said, so startled that his costume narrowly escaped disintegration.
“Invisible Man,” said Cuss, and rushed on to the window. “We’d better clear out from here! He’s fighting mad! Mad!”
In another moment he was out in the yard.
“Good heavens!” said Mr. Bunting, hesitating between two horrible alternatives. He heard a frightful struggle in the passage of the inn, and his decision was made. He clambered out of the window, adjusted his costume hastily, and fled up the village as fast as his fat little legs would carry him.
From the moment when the Invisible Man screamed with rage and Mr. Bunting made his memorable flight up the village, it became impossible to give a consecutive account of affairs in Iping. Possibly the Invisible Man’s original intention was simply to cover Marvel’s retreat with the clothes and books. But his temper, at no time very good, seems to have gone completely at some chance blow, and forthwith he set to smiting and overthrowing, for the mere satisfaction of hurting.