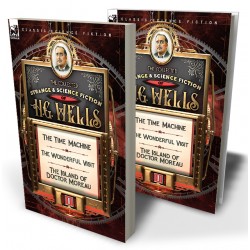 Volume 1—The Time Machine, The Wonderful Visit & The Island of Doctor Moreau

In ‘The Time Machine’ (1895) an inventor-traveller visits several future destinations including a future populated by the gentle Eloi and brutish Morlocks. ‘The Wonderful Visit’ (1895) features an angel with dazzling plumage who visits Victorian England. In ‘The Island of Doctor Moreau’ (1896) a shipwrecked man finds himself on the island home of a mad scientist who is creating human-like hybrid creatures from animals.