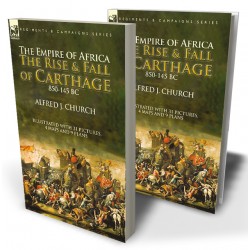 The great struggle for imperial dominance in the ancient world

Although this history of Carthage covers events from the earliest days of that state, the text concentrates particularly on the period from 550 BC until the fall of the city after a three year siege to Roman forces under Scipio Aemilianus in the Third Punic War in 146 BC. This period in the Mediterranean ancient world was dominated by the rivalry between Carthage and Rome which was inevitably moving towards the total destruction of one of the protagonists. Church’s book is an excellent history that describes these conflicts in detail from the campaigns of Malchus and the Battle of Alalia through to the struggles in Sicily, Spain, Italy and Africa. Notable battles such as Crimessus, Trasumennus, Cannae, Zama and many others are described together with accounts of the famous generals of both armies. This Leonaur edition is profusely illustrated with line drawings, maps and plans to support the text.

Xantippus arranged the elephants in a single line in front. Behind these he placed what Polybius calls “the Carthaginian phalanx.” Probably the desperate condition of the country had brought a force of native Carthaginians into the field. On the right wing were posted the heavy-armed mercenaries. With them were ranged also some of the light-armed troops and of the cavalry. The left wing was made up entirely of the two latter kinds of troops.
Regulus, on the other hand, when he saw that the Carthaginians were bent on fighting, arranged his line of battle with the special view of holding his ground against the elephants, which his men greatly feared. The light-armed troops were, as usual, posted in front; but behind them stood the legions in unusually deep and close order. The cavalry were posted as usual on the wings. These tactics were well contrived to resist the elephants, but laid the army, with its narrow front, open to the flank attacks of the powerful Carthaginian cavalry.
Xantippus began the battle by a forward movement of his elephants against the Roman centre. His cavalry charged at the same time on either wing. The Roman horse, five hundred only against four thousand—if these numbers are right—was speedily overpowered. The Roman left wing at first fared better. Charging fiercely, with not the less zeal because they were not called to encounter the dreaded elephants, they fell on the heavy-armed mercenaries, routed them, and pursued them as far as their camp. The centre, too, held its own for a time. The front ranks, indeed, were trampled down in heaps by the elephants, but the main body, with its deep, close files, stood firm. But they had to face about to resist attacks in front, on the sides, and in the rear.
One part, after driving back the elephants, was met by the phalanx of native Carthaginians, which was fresh and unbroken, and indeed had not been in action at all; another had to resist the furious charges of the cavalry; nor were there any reserves to be brought up. The greater part of the army fell where they stood: some crushed by the elephants, others struck down by the javelins showered on them by the nimble African horsemen, some slain in more equal conflict with the Carthaginian heavy-armed. The few that sought safety in flight died but with less honour. The way to the fortified post which they held upon the sea-coast (it was called Aspis or Clypea from its resemblance to a shield) was over a flat and open country; the cavalry and the elephants pursued the fugitives, and few reached the fort. A solid body of two thousand men, however, which had broken through the mercenaries, was able to make good its retreat to Aspis. Five hundred prisoners were taken, among them the Consul Regulus. All the rest of the army, scarcely less than twelve thousand in number, perished on the field or in the flight.
The great historian, (Polybius), from whom I have taken this account, concludes his narrative of the campaign with reflections on the changes of fortune which bring men down in the course of a day from the heights of prosperity to the depths of misery, and on the marvellous results which the genius of a single man can effect; but he says nothing either here or afterwards of the romantic story of the fate of the prisoner Regulus. We are not certain to what year it belongs—we are not even sure that it is true at all; on the other hand, it is too famous, too noble in its meaning and moral, to be omitted. I may therefore tell it now where it will fitly close the career of one of the great soldiers of Rome, the simple, frugal men who were called from the plough to command the armies of the republic.