Belle Boyd: the Recollections of a Famous Female Confederate Spy During the American Civil War

Home » Belle Boyd: the Recollections of a Famous Female Confederate Spy During the American Civil War 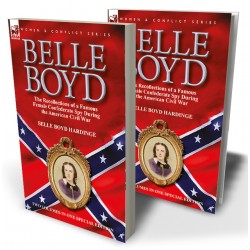 Isabella Maria Boyd (1844-1900) was one of the most famous and notorious female Confederate spies at work during the American Civil War. Best known as ‘Belle’, she operated from an hotel owned by her father in the town of Front Royal, in the Shenandoah Valley of Virginia and is credited with providing information valuable to her cause particularly to General ‘Stonewall’ Jackson in 1862. Belle appeared to have a charmed life for she managed on several occasions to narrowly avoid being shot or incarcerated despite being arrested by the Union on six occasions. She was eventually captured but released when she fell ill. Perhaps Belle Boyd wrote her memoirs ‘with advantages’ to be fully equal to her reputation, but they nonetheless provide a highly entertaining insight into the life of one of the American Civil War’s most enduring characters. Originally published in two volumes, Belle Boyd’s entire book is here offered in a single, good value Leonaur edition.

The night before the departure of General Shields, who was about, as he informed us, to “whip” Jackson, a council of war was held in what had formerly been my aunt’s drawing-room. Immediately above this was a bedchamber, containing a closet, through the floor of which I observed a hole had been bored, whether with a view to espionage or not I have never been able to ascertain. It occurred to me, however, that I might turn the discovery to account; and, as soon as the council of war had assembled, I stole softly upstairs, and, lying down on the floor of the closet, applied my ear to the hole, and found, to my great joy, I could distinctly hear the conversation that was passing below.
The council prolonged their discussion for some hours; but I remained motionless and silent until the proceedings were brought to a conclusion, at one o’clock in the mornings As soon as the coast was clear I crossed the courtyard, and made the best of my way to my own room, and took down in cypher everything I had heard which seemed to me of any importance.
I felt convinced that to rouse a servant, or make any disturbance at that hour, would excite the suspicions of the Federals by whom I was surrounded; accordingly, I went straight to the stables myself, saddled my horse, and galloped away in the direction of the mountains.
Fortunately, I had about me some passes which I had from time to time procured, for Confederate soldiers retaining south, and which, owing to various circumstances, had never been put in requisition. They now, however, proved invaluable; for I was twice brought to a stand-still by the challenge of the Federal sentries, and who would inevitably have put a period to my adventurous career had they not been beguiled by my false passport.
Once clear of the chain of sentries, I dashed on unquestioned across fields and along roads, through fens and marshes, until, after a scamper of about fifteen miles, I found myself at the door of Mr. M.s house. All was still and quiet: not a light was to be seen. I did not lose a moment in springing from my horse; and, running up the steps, I knocked at the door with such vehemence that the house re-echoed with the sound. It was not until I had repeated my summons, at intervals of a few seconds, for some time, that I heard the response, “Who is there?” given in a sharp voice from a window above.
“It is I.”
“But who are you? What is your name?”
“Belle Boyd. I have important intelligence to communicate to Colonel Ashby: is he here?”
“No; but wait a minute: I will come down.”
The door was opened, and Mrs. M. drew me in, and exclaimed, in a, tone of astonishment—
“My dear, where did you come from?” and how on earth did you get here?”
“Oh, I forced the sentries,” I replied, “and here I am; but I have no time to tell the how, and the why, and the wherefore. I must see Colonel Ashby without the loss of a minute: tell me where he is to be found,”
Upon hearing that his party was a quarter of a mile farther up the wood, I turned to depart in search of them, and was in the very act of remounting when a door on my right was thrown open, and revealed Colonel Ashby himself, who could not conceal his surprise at seeing me standing before him.
“Good God! Miss Belle, is this you? Where did you come from? Have you dropped from the clouds? or am I dreaming?”
I first convinced him he was wide awake, and that my presence was substantial and of the earth—not a visionary emanation from the world of spirits—then, without further circumlocution, I proceeded to narrate all I had overheard in the closet, of which I have before made mention, I gave him the cypher; and started on my return.
I arrived safely at my aunt’s house, after a two hours’ ride, in the course of which I “ran the blockade” of a sleeping sentry, who awoke to the sound of my horse’s hoofs just in time to see me disappear round an abrupt turning, which shielded me from the bullet he was about to send after me. Upon getting home, I unsaddled my horse and “turned in”—if I may be permitted the expression, which is certainly expressive rather than refined—just as Aurora, springing from the rosy bed of Tithonus, began her pursuit of the flying hour; in plain English, just as day began to break.