Home » A Soldier’s Diary: a Royal Engineer During the First World War on the Western Front at Ypres, 1918 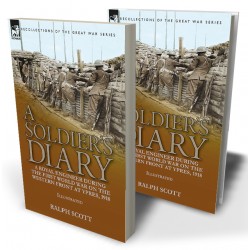