Home » Australia in New Guinea, 1914: the Campaign on Land & Sea in the Pacific During the First World War 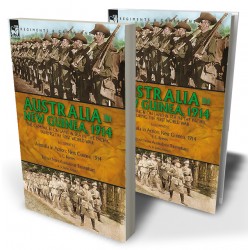