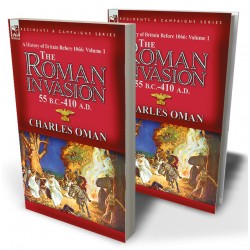 Professor Charles Oman’s exemplary credentials as an historian require no elaboration. His substantial volume of the history of Britain, covering a period of more than 1,000 years and culminating in the Norman Invasion of 1066, is a masterful, authoritative work on the subject. Mindful of the specialised interests of readers and students of history, Leonaur has divided that work into three separate books, each one of which concentrates on a troubled period in detail: The Roman Invasion, The Anglo-Saxon Invasion and The Danish Wars. The first volume, of course, commences with the military expeditions led by Julius Caesar in 55 B.C. and 54 B.C. In AD 43, four Roman legions set out to conquer Britain, which led to almost two decades of tribal warfare in England. Wars with Scottish tribes would embroil the empire for two centuries, before Barbarian incursions from the continent together with the decline of Rome itself eventually led to an end to Roman rule.

Numerous armed natives could be seen on the heights. This was not the locality at which the expeditionary force could be safely landed, nor had Caesar any intention of doing so, as he knew from Volusenus’s report that there was shelving beach instead of rugged chalk cliffs only a few miles away to the north. He waited till his slow-sailing transports had come up, and till the tide had begun to run eastward, and then in the afternoon bade the whole armament steer along shore in the direction of Deal and Walmer. The moment that his intention was visible the Britons on the cliffs above were seen streaming off for the same goal.
With the tide in their favour the Roman ships could sail faster than the British levies could march, and when Caesar bade his captains turn their prows shoreward to a point some seven miles north of Dover, only the chariots and horsemen of the Cantii were in sight, the tribal levies on foot were panting far behind. Still a fierce resistance was made to the landing; the transports had run aground some way from the shore, since the beach was gently shelving. The legionaries, when invited by their officers to leap into water from four or five feet deep, and to wade up for many yards to the land, hung back, daunted by the shower of missiles already playing upon them, and by the sight of hundreds of wild charioteers careering along the shingle and shouting their discordant war-cries.
Caesar was obliged to order his war-galleys, on which the archers and slingers were serving, to push as near the shore as possible, and to cover the disembarkation by their shooting. Many of the Britons fell, and others drew back, so that the Romans were emboldened to plunge into the water and push forward. We are told that the standard-bearer of the Tenth legion showed them the way, by pushing far ahead and challenging his fellow-soldiers to desert their eagle and betray their general if they dared. But when the legionaries began to wade up the watery slope in disordered groups, the boldest of the Britons came down to meet them, riding or even driving into the waves, and coming to hand-strokes with the invaders.
Now that both were mixed together, the Roman archers and slingers could no longer let fly, for fear of harming their friends, so that they ceased to be of any assistance. But chariots are poor devices on a shingly beach, and when the British chiefs leaped down and fought on foot, knee-deep in the water, they were no better off than their opponents. Gradually the Romans formed into solid clumps and fought their way up the beach. When they felt firm ground under their feet, and could close up in some sort of regular array, the Britons began to draw off, and presently the whole band gave way, and rode, drove, or ran off towards the interior.
There was no pursuit, because the Romans were utterly destitute of cavalry: the eighteen horse-transports had never come up. Whether the tribal infantry of the Britons arrived in time to take any serious part in the fighting is uncertain: they had seven miles to run, and must have arrived dead beat, long after the battle had begun. Caesar makes no mention of them, dwelling on the audacity and courage of the charioteers and horsemen alone.
That night Caesar entrenched a camp close to the beach, and hauled his galleys ashore: the heavy transports were anchored where they had run aground, the labour of hauling them up beyond high-water mark seeming to the proconsul excessive and unnecessary. On the following day he was delighted to receive a deputation from the enemy: the men of Kent, on whom all the fighting had fallen, for no one had yet come to their aid, were disheartened. They gave up their prisoner Commius, apologised for their resistance, which they ascribed to the hot-headedness of their young men, and offered to submit and give hostages. Caesar accepted their excuses, received their submission, and chose a certain number of hostages; the rest were to be sent in within a few days.
It is probable that the Britons might have kept the terms if the powers of nature had not intervened. But on the morning of August 30, just as the belated horse-transports came in sight, a terrible north-easterly gale arose. The approaching ships were swept down channel, and ultimately came ashore after many perils, at various points on the coast of Gaul. As night came on the weather grew worse: many of the anchored transports were driven ashore, while the galleys which had been dragged up to the line of the ordinary high-water mark, were not beyond the reach of the specially high tide accompanying the time of full moon.
The sea, helped by the wind, washed over them and did them much harm. When the morning light came it was seen that many vessels of both classes had been broken up, and that most of the remainder had lost oars, spars, and tackle, and were in an unseaworthy condition.
The Britons noting the effects of the gale, a line of wrecks and stranded vessels, thought that the powers of the air had come to their aid, and resolved to try once more the chance of war. No more hostages came in, and it was clear that trouble was impending. Caesar turned all hands to work to repair his fleet: twelve ships were given up as hopeless wrecks, and with their timber, metal fittings, and surviving tackle, he began to patch up the rest. Meanwhile the stores brought from Gaul were exhausted, and the legionaries had to forage for food, which they got by cutting all the standing corn for some miles inland from the camp.