The Novik’s War at Sea: the Imperial Russian Protected Cruiser and the Russo-Japanese War, 1904-5

Home » The Novik’s War at Sea: the Imperial Russian Protected Cruiser and the Russo-Japanese War, 1904-5 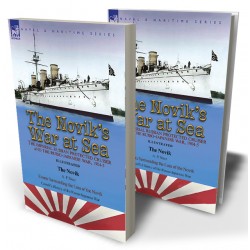 The Novik by A. P. Steer
Events Surrounding the Loss of the Novik from Cassell’s History of the Russo-Japanese War

The Russo-Japanese war as it was fought at sea in the first years of the 20th century fascinates readers and students of naval warfare, since it may justifiably be described as the first war of the modern battleships. Russia, overly confident of its maritime pre-eminence, expected to give the recently modernised and inexperienced Japanese Navy an easily delivered and harsh lesson in conflict at sea, but instead paid a heavy price for its hubris. The author of the principal work in this special Leonaur edition served as an officer on board the Novik in 1904 and describes the actions which led to her destruction in vivid detail from first-hand experience. Readers familiar with Semenoff’s work on the period will discover interesting corroborating information in these pages. This account is supported by an essay on the subject, extracted from Cassell’s history of the war, and has been enhanced with photographs and illustrations which did not accompany the original publication.

Whilst these sad thoughts were chasing one another in my brain, my men had manned the boats. A few minutes later we were alongside the Novik, who got under weigh at once and headed for some smoke we saw on the horizon. It was very evident that everyone realised how critical the situation was: there was none of the usual chaffing and joking. Everybody was absorbed in the preparation for action, all the while keeping an anxious eye in the direction of the enemy to try and make out which of his ships it was we had to face.
Our uncertainty did not last long. The ship now in sight could only be either the Niitaka or the Tsushima, both of which carried six 6-inch guns and ten 12-pounders, whereas we only had six 4.7-inch guns to meet them with. Our situation, already disadvantageous, was made worse by the fact that we felt that another ship was coming from the direction of the Straits of La Pérouse. Though we were steaming for all we were worth, the distance rapidly decreased, and the enemy’s hull was soon visible above the horizon. She could be made out clearly with the naked eye; with glasses one could see the men on the upper deck. She suddenly altered course, and a small flame jutted out from her side. We instantly replied with every gun that could bear. The die was cast!
As usual, the first rounds went over, but the range was soon found, and the first report came up from below: “Shell burst in the first lieutenant’s cabin.” No sooner had the boatswain’s party rushed to the spot, when a second report came, “Shell burst on the lower deck,” followed almost at once by “Shell burst in the ward-room.” As we did not cease fire, the boatswain’s party had to attend at three different places at the same time. To our great satisfaction, we observed our shell falling pretty regularly on the target. There were a few more hits in our upper works, but nothing below water, and no one had so far been hurt. We plucked up courage, when the ominous news came up from the engine-room, that in two of the boilers, tubes had burst, and our speed dropped at once. Rage at our impotence strangled me. I began to swear horribly. I had no idea at whom my anger was directed. I wished I could have concentrated it only on the enemy.
A small projectile passed over the poop, cut the gun-layer at one of the stern guns literally in half, and badly wounded two of his gun’s crew. I said to myself, “It is getting hot. When will my turn come?” but by force of habit I continued in a mechanical way to give my orders. The gun-layer of the disengaged gun took the place of the one who had been killed, and without even taking the trouble to move the body away, he calmly fired off round after round, to avenge his shipmate.
An awful explosion took place behind me. At the same instant I felt a blow on my head and a sharp pain in my side. My breath failed me, and feeling sure that I was nearly cut in half, my eyes instinctively looked about for a good place to fall. By degrees my breath returned, and I realised that my head alone was badly hurt, and that I had only a simple contusion in my side. Killed and wounded were lying around me.
I heard groans, and the drummer, full of sympathy, came up and whispered in my ear, “You are losing your brains, sir,” which under any other circumstances would have made me smile. How indeed could I keep myself upright without brains? I felt my head all over, and my hand met something warm and soft, which must have been a large clot of blood. I felt no pain, and tied up my face with my handkerchief. Then I began to lift up the wounded. A single projectile had been sufficient to kill ten men.
I heard that a very bad inrush of water had taken place in the tiller compartment. The ship was now down by the stem and had a heel at the same time. An engineer came up to say that two more boilers had to be shut off. That made six altogether, and our speed was reduced by one-half. We were just beginning to feel that soon it would be impossible to go on, when a report came up from below that the water was rising so fast aft that the steering engine was no longer working. Without a rudder it was impossible to fight, at the most we could merely move ahead.
The poop had, so to speak, ceased to exist. Only the two guns remained, not having been touched, by some miracle, and kept up a hot fire. Except for two or three men, the crews had all been swept away. Anyone at hand had been taken to replace them.
It was then that to our intense astonishment we saw our adversary, who no doubt was well aware of our sad plight, instead of increasing his fire, cease it altogether and make off at top speed. After having saluted his retreat with a few shell, we dragged ourselves with one engine only back to Korsakoff, to bind up our wounds.