The Collected Supernatural and Weird Fiction of Theo Gift: Four Short Stories of the Strange and Unusual

Home » The Collected Supernatural and Weird Fiction of Theo Gift: Four Short Stories of the Strange and Unusual 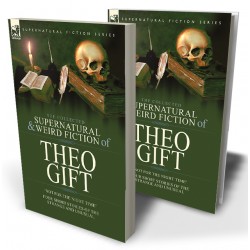 Not in the Night Time

Victorian Gothic Chills at their finest

Theo Gift was not, in fact, a man, but a pseudonym of Dorothy Havers, a great personal friend of the acclaimed children’s fiction author, Edith Nesbit. Havers occasionally collaborated with Nesbit on her juvenile fiction, though Nesbit also had a taste for the fiction of the ghostly and other worldly and wrote some well-regarded supernatural stories. Although Havers was born in the English county of Norfolk, she moved to the Falkland Islands with her parents in 1854 and in later life wrote fiction for girls set in the South Atlantic islands, which brilliantly describe the local landscape and flora. In 1879 she married George Boulger, a botanist. Her output of supernatural fiction was, though excellent, not large, being principally confined to a small volume entitled, ‘Not for the Night Time’ published in 1889 which contains four substantial tales. Ghost stories are ideally suited to shorter length and in these tales are no exception, though they are perhaps longer than the norm. Havers died in England in 1923.