The Collected Supernatural and Weird Fiction of Violet Hunt: Volume 2—One Novella ‘The Corsican Sisters’, and Four Short Stories of the Strange and Unusual Including ‘The Tiger-Skin’ and ‘The Cigarette Case of the Commander’

Home » The Collected Supernatural and Weird Fiction of Violet Hunt: Volume 2—One Novella ‘The Corsican Sisters’, and Four Short Stories of the Strange and Unusual Including ‘The Tiger-Skin’ and ‘The Cigarette Case of the Commander’ 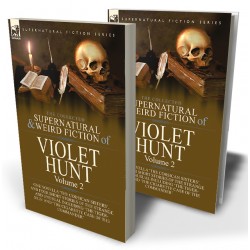 A Second Volume of the exceptional, though often neglected, fiction of Violet Hunt

This Leonaur edition contains, the novella, ‘The Corsican Sisters’, and four short Stories including ‘The Tiger-Skin’ and ‘The Cigarette Case of the Commander’.

When the two children had undressed and lain down, Hannah Cawthorne, of a gloomy North Country turn of mind that ran continually on omens and predestinations, could not help thinking how like two corpses laid out they looked, lying so straight, their little bodies outlined under the quilt, their eyes wide open and staring at the roof. It made her uncomfortable.
“There’s nought to be afeared on,” she thought, trying to bring comfort to herself merely, for the children were still, submissive and past all repining now. “It’s as safe as a church, but all the same. . . . Now shut your eyes,” she said aloud, “there’s good lads, and say ‘Gentle Jesus’ till ye feel the sleep coming on ye. Oh, ye’ll sleep fine, trust me. Shall I leave ye the light?”
This was a wild stretch of authority. She might have lost her place over it. She was relieved when they shook their heads and declined it.
“See here,” she went on, producing an apple from her pocket. “See here, ye can munch this atween ye.”
She laid it down on the coverlet, but no little hand came forth to take it.
“Poor bairns, they’re sad-like. . . . Eh, she’s a hard woman, is the mistress! If they were mine, shouldn’t I like them to nestle in aside o’me! This room is fair lonesome. Naebody could hear them if they were to skrike out. . . .”
“What are ye looking at, my honey?” she asked John curiously, for the child’s eyes remained obstinately fixed on the roof, as if he saw something there.
“He’s looking at the hole in the wall,” volunteered the eldest boy at last. “He’s shiverin’.”
“Hap him up in your arms, ma bonny bairn, that’ll soon warm him. . . . Now I must be going, lads. . . . Goodnight to ye both. . . .”
Hesitating, reluctant, she took up her candle and made a start for the door.
“I don’t half like leaving them,” she murmured, as she stole out casting a last look at the two children, lying clasped, according to her recommendation, in each other’s arms. Their faces were hidden in each other’s necks, their sad apprehensive eyes were closed, obediently summoning sleep.
Gently snecking the door, she blundered down the rickety staircase, and made her way back into the other, safer part of the house. Ignorant, she passed by the mysterious oracle hanging in the hall, unable to read or understand the plain meaning which its hands now bore.
“Eh, but she’s a right hard woman, is the mistress, and master follows her in all things. He’d have let the poor childer come in aside him, when they begged and prayed fit to turn a heart of stone. . . .”
She did not toss on her hard pallet, but lay stupefied in the heavy slumber that was the meed of her arduous existence. Upstairs, in the best bedroom, the Reverend Matthew Cooper slept off his headache. His wife did not drowse, but lay by her husband’s side, straight and still as she had laid down, congratulating herself on the great healing storm that was even now breaking over the Vicarage, gloating over its promise of recomfiture and peace. . . . It thundered and lightened for two hours. When morning dawned, the great drought was over, and the air was refreshed.
Hannah, the maid, rose and went about her duties with a light heart, and presently, having started the kitchen fire, called the parson and his wife to resume theirs.
When it was time, she pulled her dirty kitchen apron aside, put the kettle where it could not for the moment boil over, and went to call the parson’s children.