Flying the Atlantic in Sixteen Hours: the First Non-Stop Trans-Atlantic Flight, 1919 by One of the Aviators

Home » Flying the Atlantic in Sixteen Hours: the First Non-Stop Trans-Atlantic Flight, 1919 by One of the Aviators 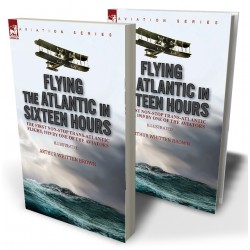 Brown was a Scottish aviator, born in Glasgow in 1886. Although he was initially commissioned in the Manchester Regiment during the First World War, he subsequently transferred to 2 Squadron, Royal Flying Corps as an observer. He was shot down twice in action eventually being captured by the Germans. After the war his association with the Vickers company resulted in the proposal that he should become navigator for the pilot, John Alcock in an attempt to cross the Atlantic Ocean non-stop, flying in a modified Vickers Vimy heavy bomber. In June, 1919, the pair took off from Newfoundland and, after a world first flight of 1,980 miles in 16 hours & 12 minutes, they landed safely in an Irish bog. Brown and Alcock were both knighted by King George V for their achievement. This book, written by Brown chronicles that extraordinary adventure.

We began to think about sunrise and the new day. We had been flying for over ten hours; and the next ten would bring success or failure. We had more than enough petrol to complete the long journey, for Alcock had treated the engines very gently, never running them all out, but varying the power from half to three-quarter throttle. Our course seemed satisfactory, and the idea of failure was concerned only with the chance of engine mishap, such as had befallen Hawker and Grieve, or of something entirely unforeseen.
Something entirely unforeseen did happen. At about sunrise—3:10 a. m. to be exact—when we were between thirty-five hundred and four thousand feet, we ran into a thick bank that projected above the lower layer of cloud. All around was dense, drifting vapor, which cut off from our range of vision even the machine’s wing tips and the fore end of the fuselages.
This was entirely unexpected; and, separated suddenly from external guidance, we lost our instinct of balance. The machine, left to its own devices, swung, flew amok, and began to perform circus tricks.
Until we should see either the horizon or the sky or the sea, and thus restore our sense of the horizontal, we could tell only by the instruments what was happening to the Vickers-Vimy. Unless there be outside guidance, the effect on the Augean canal in one’s ears of the centrifugal force developed by a turn in a cloud causes a complete loss of dimensional equilibrium, so that one is inclined to think that an aeroplane is level even when it is at a big angle with the horizontal. The horizontal, in fact, seems to be inside the machine.
A glance at the instruments on the dashboard facing us made it obvious that we were not flying level. The air speed crept up to ninety knots, while Alcock was trying to restore equilibrium. He pulled back the control lever; but apparently the air speed meter was jammed, for although the Vickers-Vimy must have nosed upwards, the reading remained at ninety.
And then we stalled—that is to say our speed dropped below the minimum necessary for heavier-than-air flight. The machine hung motionless for a second, after which it heeled over and fell into what was either a spinning nosedive, or a very steep spiral.
The compass needle continued to revolve rapidly, showing that the machine was swinging as it dropped; but, still hemmed in as we were by the thick vapor, we could not tell how, or in which direction we were spinning.
Before the pilot could reduce the throttle, the roar of the motors had almost doubled in volume, and instead of the usual 1650 to 1700 revolutions per minute, they were running at about 2200 revolutions per minute. Alcock shut off the throttles, and the vibration ceased.
Apart from the changing levels marked by the aneroid, only the fact that our bodies were pressed tightly against the seats indicated that the machine was falling. How and at what angle it was falling, we knew not. Alcock tried to centralize the controls, but failed because we had lost all sense of what was central. I searched in every direction for an external sign, and saw nothing but opaque nebulousness.
The aneroid, meantime, continued to register a height that dropped ever lower and alarmingly lower—three thousand, two thousand, one thousand, five hundred feet. I realised the possibility that we might hit the ocean at any moment, if the aneroid’s exactitude had been affected by differences between the barometric conditions of our present position and those of St. John’s, where the instrument was set.
A more likely danger was that our cloud might stretch down to the surface of the ocean; in which case Alcock, having obtained no sight of the horizon, would be unable to counteract the spin in time.
I made ready for the worst, loosening my safety belt and preparing to salve my notes of the flight. All precautions would probably have been unavailing, however, for had we fallen into the sea, there would have been small hope of survival. We were on a steep slant, and even had we escaped drowning when first submerged, the dice would be heavily loaded against the chance of rescue by a passing ship.
And then while these thoughts were chasing each other across my mind, we left the cloud as suddenly as we had entered it. We were now less than a hundred feet from the ocean. The sea-surface did not appear below the machine, but, owing to the wide angle at which we were tilted against the horizontal, seemed to stand up level, sideways to us.