Voyage of the Liberdade: From Brazil Through the Caribbean to the United States of America, 1888

Home » Voyage of the Liberdade: From Brazil Through the Caribbean to the United States of America, 1888 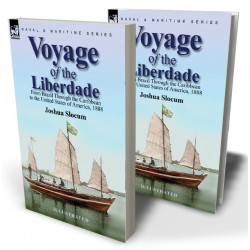 American mariner Joshua Slocum is best remembered for his 1895 solo circumnavigation of the world and the bestselling book, now a classic of sailing literature, that ensued, 'Sailing Alone Around the World'. That epic voyage in the sloop, 'Spray' was not, however, Slocum's first great sailing adventure or the first of them which he recounted in a book. Following the loss of his ship off the coast of South America, Slocum salvaged enough material from the wreckage to build another craft which he and his family sailed through the Caribbean to return to the United States. This brave little 35ft boat was launched on May 13th, 1888 and named 'The Liberdade' to celebrate, on that same day, the abolition of slavery in Brazil. Slocum has rarely been surpassed as a narrator of nautical adventures and the 'Voyage of the Liberdade' is a riveting and essential companion work to 'Sailing Alone around the World'.

July 23rd, 1887, brings me to a sudden and shocking point in the history of the voyage that I fain would forget, but that will not be possible. Between the hours of 11 and 12 p. m. of this day I was called instantly to defend my life and all that is dear to a man.
The bark, anchored alone in the harbour of Antonina, was hid from the town in the darkness of a night that might well have covered the blackest of tragedies. My pirates thought their opportunity had surely come to capture the Aquidneck, and this they undertook to do. The ringleader of the gang was a burly scoundrel, whose boast was that he had “licked” both the mate and second mate of the last vessel he had sailed in, and had “busted the captain in the jaw” when they landed in Rio, where the vessel was bound, and where, of course, the captain had discharged him.
It was there the villain shipped with me, in lieu of one of the Rosario gang who had been kindly taken in charge by the guard at Ilha Grande and brought to Rio to be tried before the American consul for insubordination. Said he, one day when I urged him to make haste and help save the topsails in a squall, “Oh, I’m no soft-horn to be hurried!”
It was the time the bark lost her topgallant-mast and was cast on her beam-ends on the voyage to Antonina, already told; it was, in fact, no time for loafing, and this braggart at a decisive word hurried aloft with the rest to do his duty. What I said to him was meant for earnest, and it cowed him. It is only natural to think that he held a grudge against me forever after, and waited only for his opportunity; knowing, too, that I was the owner of the bark, and supposed to have money. He was heard to say in a rum-mill a day or two before the attack that he would find the —— money and his life, too. His chum and bosom friend had come pretty straight from Palermo penitentiary at Buenos Ayres when he shipped with me at Rosario.
It was no secret on board the bark that he had served two years for robbing, and cutting a ranchman’s throat from ear to ear. These records, which each seemed to glory in, were verified in both cases.
I met the captain afterwards who had been “busted in the jaw”—Captain Roberts, of Baltimore, a quiet gentleman, with no evil in his heart for anyone, and a man, like myself, well along in years.
Two of the gang, old Rosario hands, had served for the lesser offence of robbery alone—they brought up in the rear. The other two of my foremast hands—one a very respectable Hollander, the other a little Japanese sailor, a bright, young chap—had been robbed and beaten by the four ruffians, and then threatened so that they deserted to the forest instead of bringing a complaint of the matter to me, for fear, as the Jap expressed it afterwards, when there was no longer any danger,—for fear the “la-la-long mans (thieves) would makee killo mi!”
The ringleader bully had made unusual efforts to create a row when I came on board early in the evening; however, as he had evidently been drinking, I passed it off as best I could for the natural consequence of rum, and ordered him forward; instead of doing as he was bid, when I turned to hand my wife to the cabin he followed me threateningly to the break of the poop. What struck me most, however, was the conduct of his chum, who was sober, but in a very unusual high, gleeful mood. It was knock-off time when I came along to where he was seizing off the mizzen topgallant backstay, the last of the work of refitting the late pampeiro damage; and the mate being elsewhere engaged, I gave the usual order to quit work.
“Knock off,” I said to the man, “and put away your tools. The bark’s rigging looks well,” I added, “and if tomorrow turns out fine, all will be finished;” whereupon the fellow laughed impertinently in my face, repeating my words, “All will be finished!” under his breath, adding, “before tomorrow!”
This was the first insult offered by the “Bloodthirsty Tommy,” who had committed murder only a short time before; but I had been watched by the fellow, with a cat-like eye at every turn.
The full significance of his words on this occasion came up to me only next morning, when I saw him lying on the deck with a murderous weapon in his hand. I was not expecting a cowardly, night attack, nevertheless I kept my gun loaded. I went to sleep this night as usual, forgetting the unpleasant episode as soon as my head touched the pillow; but my wife, with finer instincts, kept awake. It was well for us all that she did so. Near midnight, my wife, who had heard the first footstep on the poop-deck, quietly wakened me, saying, “ We must get up, and look out for ourselves! Something is going wrong on deck; the boat tackle has been let go with a great deal of noise, and—O! don’t go that way on deck. I heard someone on the cabin steps, and heard whispering in the forward entry.”