The Revolt of the Potemkin: the Naval Revolt of 1905 Which Heralded the Russian Revolution

Home » The Revolt of the Potemkin: the Naval Revolt of 1905 Which Heralded the Russian Revolution 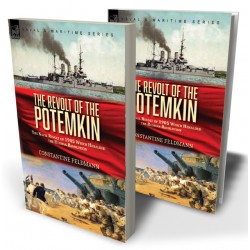 The ship that became an iconic symbol of the Soviet revolution

The Potemkin was a Russian pre-dreadnought battleship built for the Imperial Navy's Black Sea Fleet. Some of its crew, but by no means the majority, rebelled against their officers in June 1905 and this act is considered to be a precursor to the Russian Revolution of 1917. The ship's wider fame became assured with Sergei Eisenstein's classic motion picture of 1925, 'Battleship Potemkin'. Following the rebellion, the crew fled to Romania to escape inevitable reprisals and the ship was recovered, but it was ill fated as it accidentally sunk a Russian submarine in 1909. With no sense of sentimentality for what it symbolised the Potemkin was scrapped by the Soviets in 1923. This book was written by a participant in the aftermath of the rebellion which may have effected its objectivity, but it remains a relevant and interesting account.

Revolutionary agitation and propaganda were set afoot in the Black Sea Fleet as long ago as 1903. “Circles”’ were organised among the sailors in that year, and the dissemination of leaflets had begun. And this agitation had taken a firm hold on the mass of the sailors, a process greatly assisted by the intolerable conditions in which they found themselves.
Everyone is familiar with the hideousness of the soldier’s life in barracks. The same barbarous treatment, the same senseless drill, the same thieving on the part of the officers, prevail in an even grimmer form among the sailors. In the navy the dishonesty of the officers went to monstrous and ridiculous extremes. Thus, for instance, the sailors are supposed to be provided with biscuit and galettes during the voyage. (Biscuit consists of black bread sliced and dried, galettes are cakes or rolls of white bread.) As the latter are more expensive than the biscuit, the sailors were served at first rations of biscuit only; meanwhile the galettes went mouldy, and by the time the store of biscuit was exhausted, the sailors had to eat maggoty galettes.
The exploitation of the sailors became more scandalous than ever after the appointment of Tchuhnin to the command of the Fleet. This admiral invented a new means of enriching the “gallant” officers at the expense of the sailors; he gave instructions for reducing the number of free hired labourers in the government dockyards and replacing them with sailors. The money saved by this clever device of the head thief of the Black Sea Fleet went into the pockets of the good Christian officers.
All these corrupt practices were at the expense of the men who make up the more educated branch of the Russian service. The fact is that service in the fleet requires a higher degree of intelligence and understanding than service in the army. The management of the complicated weapons of naval warfare, the care of the machinery of the vessels, the signalling and wireless telegraphy, all require men of developed intelligence and of some education, and consequently the better educated of the proletariat and peasantry are drafted into the navy. It is easy to understand that such men would feel more keenly the fearful abuses of their life on board.
The life of a sailor of the Black Sea Fleet may be briefly summarized thus. At home in his village he has been oppressed by the landowner and the district commander (zemsky natchalnik); under the aegis of the autocracy, they have sucked his blood, and robbed him to the last crust of bread won by the sweat of his brow. Then, in the name of the Tsar, he has been clapped in prison, and beaten with rods for the slightest protest against the wanton tyranny of those in authority over him.
Finally, in the name of the same Tsar, he is dragged off to barracks, where the same noble gentlemen and pillars of the Fatherland rob him in the most shameless fashion, and trample his dignity underfoot.
And so long as he is in darkness, he bears in patience all the contumely of the Tsar’s servants; but a blind hatred of his oppressors rankles in his heart. He hides it for the time, for he does not see his enemy clearly, and knows not how to fight him. But only let a ray of light reach him, making his position clear to him, showing him his real enemies, and putting weapons in his hands for the fight, and his uncomprehending anger will be transformed into intense and conscious hatred. The submissive slave will become a terrible avenger.
This ray of light reached the sailors by way of the Social Democratic propaganda. The most efficient agent for advertising that propaganda was Tchuhnin himself. The senseless speeches of the “hero of Otchakov” could not fail to reach all the sailors of the fleet. Over and over again he held forth upon “rioting” and the Social Democrats, abusing them mercilessly, and including all the sailors in the same category.
These sallies of the gallant admiral against the Social Democrats inevitably drew the sailors’ attention to them.
“Who are these queer rioters?” the sailors wondered. “They can’t be such bad fellows since our old dragon abuses them.”
And the “dragon” lost no opportunity of making the sailors acquainted with them. I have already mentioned that he had instituted the employment of sailors in the government dockyards. There, working side by side with workmen who had long before been affected by the revolutionary propaganda, the sailors became familiar with the teaching of the Social Democrats, and got into touch with their organisations, and the work of conversion went on apace in the naval barracks. The disastrous war, in which the lives of sailors were senselessly thrown away by tens of thousands, and the absurd measures taken by Tchuhnin to combat the revolution, were potent allies of the Social Democrats.
In the November of 1904 the first mutiny of sailors took place.