The Collected Supernatural and Weird Fiction of Lettice Galbraith: Seven Short Stories of the Strange and Unusual Including ‘The Blue Room’ and ‘A Ghost’s Revenge’

Home » The Collected Supernatural and Weird Fiction of Lettice Galbraith: Seven Short Stories of the Strange and Unusual Including ‘The Blue Room’ and ‘A Ghost’s Revenge’ 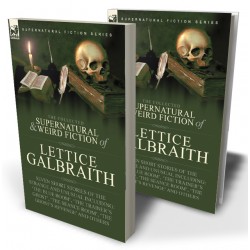 Lettice Galbraith not only wrote works on supernatural themes, she was apparently something of a mystery in her own right. She appeared on the literary scene with little pedigree in 1893, published two or three stories in quick succession, and then disappeared from public view. Whilst she was probably British, based on the paucity of information about her, no one can be certain that she wrote under her own name. Six of her ghost stories were gathered together in one small volume, New Ghost Stories, which appears in its entirety here with one additional story. Most experts in the field agree that this author made a fine contribution to the fiction of the supernatural in the style of the late Victorian era, and that her only fault was that she decided not to produce more offerings for her satisfied readership. In this Leonaur edition readers will discover ‘The Blue Room’, ‘The Trainer’s Ghost’, ‘The Seance Room’, ‘The Ghost’s Revenge’ and others.

So deeply was he wrapped in his reflections, that the manifestations went on around him unheeded. The dark curtain which screened off a portion of the room divided, and a white-robed child stepped out. It was instantly recognised by one of the sitters—a nervous, highly-strung woman, whose passionate entreaties that her dead darling would return to earth fairly harrowed the feelings of the listeners. Other manifestations followed. The audience were becoming greatly excited. Burke sat indifferent to it all, his eyes fixed on the writing before him, till his wife touched him gently.
“What is the matter, Val?” she whispered, trying to read the paper over his shoulder. “Is your answer correct?”
He turned on her sharply, crushing the message in his hand. “No,” he said audibly. “It is a gross imposture. There was no such person.”
“Hush.” She laid a restraining hand on his arm. “Do not speak so loudly. That is a point in our favour, anyway. Mr. Falconer has proposed a fresh test. He has asked if a material object, something that had been lost at any time, you know, can be restored by the spirits. Madame returned a favourable answer. Mr. Falconer could not think of anything at the moment, but I had a brilliant inspiration. I told him to ask for your diamond ring—the ring you lost when you tried to save that poor girl’s life.”
Burke rose to his feet, then recollecting himself, sat down again and tried to pull himself together. There was nothing in it. If this Madame Delphine was really acquainted with the facts of his relations with Katharine Greaves, she could not know its ghastly termination. He tried to reassure himself, but vainly. His nerve was deserting him, and his eyes roved vacantly round the semi-darkened room, as if in search of something. A sudden silence had fallen on the audience. A cold chill, like a draft of icy air, swept through the séances chamber. Mrs. Burke shivered from head to foot, and drew closer to her husband. Suddenly the stillness was broken by a shriek of horror.
It issued from the lips of the medium, who, like a second Witch of Endor, saw more than she expected, and crouched terror-stricken in the chair to which she was secured by cords adjusted by the test committee. The presence which had appeared before the black curtain was no white-clad denizen of “summerland,” but a woman in dark, clinging garments—garments, to all appearance, dripping with water—a woman with wide-opened, glassy eyes, fixed in an unalterable stony stare. It was a ghastly sight. All the concentrated agony of a violent death was stamped on that awful face.
Of the twenty people who looked upon it, not one had power to move or speak.
Slowly the terrible thing glided forward, hardly touching the ground, one hand outstretched, and on the open palm a small, glittering object—a diamond ring!
It moved very slowly, and the second or so during which it traversed the space between the curtain and the seats of the audience seemed hours to the man who knew for whom it came.
Valentine Burke sat rigid. He was oblivious of the presence of spectators, hardly conscious of his own existence. Everything was swallowed up in a suspense too agonising for words, the fearful expectancy of what was about to happen. Nearer and nearer “it” came. Now it was close to him. He could feel the deathly dampness of its breath; those awful eyes were looking into his. The distorted lips parted—formed a single word. Was it the voice of a guilty conscience, or did that word really ring through and through the room—“Murderer!”
For a full minute the agony lasted, then something fell with a sharp click on the carpetless floor. The sound recalled the petrified audience to a consciousness of mundane things. They became aware that “it” was gone.