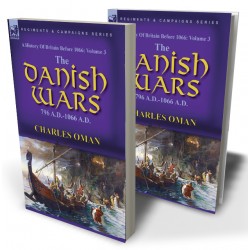 The final volume of Oman’s early conflicts for Britain

Professor Charles Oman’s exemplary credentials as an historian require no elaboration. His substantial volume of the history of Britain, embracing over 1,000 years and culminating in the Norman Invasion of 1066, is a masterful, authoritative work on the subject. Mindful of the specialised interests of readers and students of history, Leonaur has divided that work into three separate books, each one of which concentrates on a principal troubled period in detail: The Roman Invasion, The Anglo-Saxon Invasion and The Danish Wars. This, the final volume of the series, commences in 793 AD with the Viking raid on Lindisfarne which heralded a period of terror, rapine and slaughter. Oman briefly describes the origins of the Vikings. Thereafter this history considers the struggles of the Anglo-Saxon kings to keep the invaders at bay. Readers will discover the progress of the ‘Great Heathen Army’ and the expansion of Danish settlement which led, by the late 9th century, to the Viking dominance of Britain until the death of King Cnut. The Anglo-Saxon, Edward the Confessor then came to the throne and, upon his death, the Earl of Wessex, Harold Godwinson controversially became king. The scene was set for a climactic conclusion and a new beginning for Britain—the Norman invasion of 1066 under William the Conqueror.

This host was a fraction of the “Great Army “which lay that year at Amiens, and had been wasting all the lands of the Somme. It sat down before Rochester, which was now fortified and well defended; but before it had made any impression on the place Alfred came up with the whole fyrd of Wessex, beat the invaders, and compelled them to escape to sea, leaving behind them their horses, and their camp full of plunder and captives.
It seems clear that Guthrum’s Danes in East Anglia must have given some help or encouragement to this host, for we read that “the army which dwelt in East Anglia wantonly broke the peace”. (Asser, §80.) After the relief of Rochester Alfred sent out a fleet from Kent against their coast “praedandi causa.” One cannot conceive that the righteous king would have taken such a step without provocation. This fleet met sixteen Danish galleys at the mouth of the Stour, captured them and slew their crews. But the whole naval force of East Anglia then turned out, fought a second battle in the same estuary with the English fleet, and defeated it. This was not to be the end of the matter.
Alfred in the next year (886) post incendia urbium stragesque populorum, (Asser, §83.) after considerable fighting, therefore, seized London, which had hitherto remained in the hands of the Danes; he “honourably restored the city and made it habitable,’’ after which he handed it over to be kept by Aethelred, ealdorman of Mercia.
******
That London was not reckoned as a recovered part of Mercia, but as a new conquest bestowed on Aethelred personally, is (I think) shown by the fact that Edward the Elder resumed possession of it, and of Oxford, in 910, on Aethelred’s death, while he allowed the Mercian state to exist a few years longer, while his sister Aethelflaed lived.
******
Ethelweard distinctly says that London had to be besieged before it was taken, and is probably right, though neither Asser nor the Chronicle mention a siege. Presumably from the language used by the two last-named authors the city was in a dilapidated condition, and needed rebuilding as well as repeopling with a new body of English inhabitants. Apparently, Alfred planted there military settlers, the burhware of whom we hear a few years later. It would seem that the cnihtengild of London, which appears in early charters, was the association of these original men of war, who were at first rather a garrison than mere colonists. (Cniht = the military follower of a thane—see the statutes of the Cambridge Thegns’ Gild and the Exeter Gild). The border of the Danelaw was still so close that no one averse to hard blows would have dared to take up a grant of land or houses in the newly restored city.
Soon after the fortification of London, Guthrum and his people seem to have come to terms with Alfred, and to have made peace on the lines which he dictated. The document known as Alfred and Guthrum’s Frith must belong to this year (886) as it precisely defines the boundary between Dane and Englishman according to the new condition of affairs. The frontier lies “up the Lea to its source, then straight across to the Ouse at Bedford, then along the Ouse to Watling Street.” This line left London, with Middlesex, most of Hertfordshire and part of Bedfordshire (if we may use names of a later date) to Alfred, and this, no doubt, was the amount of territory that he had just won. Beyond the spot near Stony Stratford, where the Ouse is crossed by Watling Street, the definition of borders is not continued, obviously because Guthrum’s power did not extend over the rest of Danish Mercia, where Northampton, Leicester and Derby were held by jarls who did not owe him allegiance.