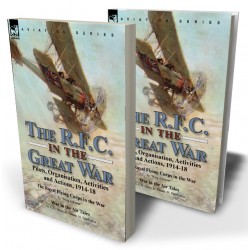 The Royal Flying Corps in the War by “Wing Adjutant”
War in the Air Tales by A. G. Hales, H. Harper, M. Pemberton

Descriptions of the early days of British air power

This unique Leonaur book contains two accounts of aerial warfare during the First World War. The first describes the Royal Flying Corps from the perspective of one its senior officers. The topics covered include how the first pilots were drawn into the service and how they were trained to become flyers. On the battlefront, long reconnaissance operations, routine patrolling, artillery observation work, bombing and photography missions and air combat are all covered. The function of headquarters, the RFC’s activities beyond the Western Front and in the sideshow theatres of the war, the development and future of the air force are also considered. The second piece in this book contains anecdotes by several airmen on topics which include fighting the German Zeppelin menace and the triumph of allied air-power in 1918 in the battle for Amiens. Includes for the first time illustrations and photographs not previously published with either text.

As the aeroplane gains height, the pilot slowly banks and rudders to the left, and swings round in a wide curve. Beneath him he sees his aerodrome, with the machines waiting to ascend. Each machine has several attendant specks—mechanics who attend to her toilet—which gradually grow smaller as the earth recedes. The aerodrome seems very small, a tiny rectangle surrounded by cultivated fields, and his gaze takes it all in at a glance. One of the other machines, crawls over the ground, and then, by its movements, he knows it is in the air. A glance at his aneroid tells him he has already ascended 5,000 feet, so he heads for the town over which he has orders to meet their machines, to escort them on a bomb raid.
His job is to look after the other heavily loaded bombers, and keep off any marauding Hun who may approach. He glances at his map, and recognises the town he is bound for. Already in the distance other aeroplanes are arriving. By this time, he has reached 10,000 feet—the other machines are circling below him and getting into formation. As he looks, another scout arrives at his own level, his companion escort.
Presently the whole body moves off, keeping admirable formation, whilst, ever watchful, above them circle the two escorts. The pilot glances at his instruments—his engine is running beautifully—smiles to himself as he thinks of the many flights he has made in his old ’bus, and settles down to the day’s work. His companion is some half a mile away on his right. He glances aloft for a lurking Fokker, but the cloudless sky gives little chance of concealment for these mist-loving birds. Below him, far, far below, he sees the green fields looking like the patchwork cover to a bed, and in front is the long, dark, jagged line which he knows to be the trenches.
Suddenly, far below, he sees a puff of smoke, followed by the faint bang of “Archie,” who has opened earlier than usual. There is little danger to him, he knows, for the shell is evidently intended for one of the raiders. The pilot now looks to himself, fingers his gun, and generally prepares for action, as an enemy plane may appear at any moment. The objective is situated a good half-hour’s flight over the lines, but at last it appears in sight without an attack being made. As the pilot watches he sees the raid leader swoop, followed in turn by each machine of the formation.
Puffs of smoke follow as each bomb reaches its mark. Suddenly a huge cloud of smoke and a mighty roar show that the main objective has been hit. The enemy ammunition dump has been exploded, huge stores of shell and high explosive vainly stored in preparation of a coming push, have been expended in a moment, great damage has been done to surrounding buildings, and the enemy’s moral has suffered severely.
Their work accomplished, the aeroplanes turn to go. On high the escorting pilot glances around. He expects every moment to see a cloud of enemy fighters appear in the sky, for a large aerodrome is close to the dump, and the approach of the bombing squadron must have been observed. It is not long before he sees two machines climbing steeply on his left. These are followed by a third and fourth, and then by two others. Six fighters to attack the squadron. The pilot, while quite aware that the machines he is escorting are armed, knows that it is the duty of himself and his companion to take on the whole six enemy planes while the squadron escapes across the line.
His companion is already diving at the foe, and he gives a quick look round to see that he is safe from attack from the rear before joining in the fray. He singles out a victim, and manoeuvres to catch him unawares. At a range of about thirty yards, he sends a burst of fire from his gun, and swerves sharply to miss the collision. Again, he wheels, but at the same time notices a second machine coming up from behind.