Bunbury of Maida: a History & Personal Experiences of the Campaigns in Holland, Egypt & Italy by a British Staff Officer

Home » Bunbury of Maida: a History & Personal Experiences of the Campaigns in Holland, Egypt & Italy by a British Staff Officer 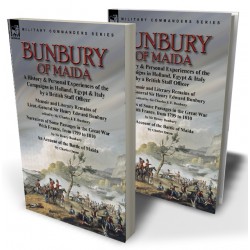 Memoir and Literary Remains of Lieut.-General Sir Henry Edward Bunbury edited by Charles J. F. Bunbury
Narratives of Some Passages in the Great War With France, from 1799 to 1810 by Henry Bunbury
An Account of the Battle of Maida by Charles Oman

There is particular interest among students of Napoleonic warfare—perhaps because it was fought far away from the well known campaigns—in the Battle of Maida fought in 1806 on the Calabrian coast of Italy. A British led expedition under Stuart, decisively defeated a French army under Reynier. Bunbury is noted for ‘particularly distinguishing himself’ during the conflict, though posterity is the principal beneficiary of Bunbury’s presence. He wote an outstanding and erudite account of the prevailing situation in the Mediterranean region, and provided essential information regarding the expedition and the battle itself. This book contains three elements including a summary of Bunbury’s active military career edited from a biography. The principal work comprises his descriptions of events in which he took part including the Campaign in Holland in 1799, the Egyptian Campaign of 1801 and, of course the military transactions which led to Maida. This work reveals Bunbury’s enduring literary ability, which has led some to regard him as the finest military historian of his day. This unique Leonaur book concludes with Professor Charles Oman’s later analysis and description of the Battle of Maida.

At this time the Castle of Reggio was occupied by a weak brigade of Neapolitans. It was contemptible as a fortress; and their government had done little or nothing to improve its defences, in the year and a half which had passed since the Battle of Maida restored it to their hands. Still it could not be taken (unless through treachery or cowardice), by an enemy unprovided with heavy artillery; and the French had none.
The Castle of Scilla, though a very small place, was of more importance. Perched on its peninsular rock it barred the passage of boats along the coast; and while it remained in our hands, the enemy was unable to form batteries, or hold their posts in security along the straits of Messina. Scilla had been occupied by the English from the time of its capture in 1806; and since our prospects had grown dark, much pains had been taken to render the little place as strong as its position would admit, and to provide for the eventual safety of the garrison. The castle was commanded on the land side by the rising slope of the mountains; and in the same direction shelter to sharpshooters was afforded, at a very short distance, by the stone houses of the town.
But the old masonry of the fort was not to be damaged unless by heavy guns; whilst its own artillery swept the beach, the town, and a considerable space around it. Sherbrooke entrusted the defence of Scilla to a man who was every inch a soldier, George Duncan Robertson, major of the 35th Regiment The garrison was composed of four companies detached from regiments in Messina, with a large proportion of artillerymen; and the engineer undertook to construct stairs from the sea, which bathed the promontory, up to the postern of the fort.
With admirable skill they cut steps in the living rock, and formed an easy communication (concealed and covered from an enemy’s fire) from the water to the gate of the castle. Constant intercourse was thus secured, unless in stormy weather, between Scilla and the Faro point; and supplies could be thrown in when wanted, or wounded men removed. As we knew that Reynier had no heavy guns, we felt very little uneasiness when we saw his troops gathering in considerable numbers on the coast between Reggio and Scilla, and more particularly near the former town; but we were soon taught what it was to have allies.
On the 30th of January, 1808, in the early morning, General Sherbrooke and I were watching without glasses the movement of three or four of the enemy’s battalions, among the gardens and orange orchards on the northerly skirts of Reggio. Presently we observed the four Neapolitan gunboats, which belonged to Messina, pulling across the straits. Sherbrooke’s immediate inquiries at the arsenal were answered by the message that the boats bad been ordered over to cannonade those Frenchmen who were exposing themselves so close to the shore. And surely enough the vessels began to fire when they were still some two miles distant from the Calabrian coast.
This did not arouse our suspicions, for such was the common custom of the Neapolitans. But they continued to push on, and to draw near to the French, and such was by no means their custom. Sherbrooke’s worst apprehensions were excited; “By ——,” cried he, “they are going to desert! Run, run to Captain Handfield, and tell him to try to bring these d——d villains back.”
Captain Handfield was the commander of the Delight brig-of-war, which was lying moored to the quay of Messina. I ran and found Handfield on deck. In an instant the mooring chain was cast off, every sail let fall; in a few minutes the Delight was stretching across the strait under a cloud of canvas. But the “villains” had by this time managed to run the gunboats ashore under a long line of stone walls lined by the French infantry. The latter were going through the form of firing volleys over the heads of the Neapolitan crews, and these again, after discharging their guns, hauled down their colours. By the time the Delight arrived near enough to use her carronades, the French soldiers were on board the gunboats.
The brig, owing to the eagerness of her commander to get hold of these vessels and drag them off, ran so close as to be exposed to a deadly fire of musketry from the walls and fences along the shore; poor Handfield, a most gallant and active young seaman, was killed, and two-thirds of his crew fell in a few minutes; the deck of the Delight was cleared, and she ran ashore. Then the French soldiers boarded, with the hopes of securing the guns of the English brig, as well as those of the Neapolitans.
But by this time, the Bittern sloop-of-war, which was cruising in the straits, had been attracted to the scene of action. Her commander, Captain Downes, stood in; and now began a second fight; the French striving to keep possession of the unfortunate brig; Downes endeavouring to drive them away, and either to get her afloat or destroy her. Short tacks and a heavy cannonade on the one side, a blaze of musketry and lighter guns on the other. But the soldiers on board the brig could not long withstand the shot of the sloop; and after losing many men they scrambled ashore. It was found impossible to float the poor Delight, and she was burned. But the French had secured the 24-pounders brought by the gunboats; and with these they were enabled to arm a battery against the old Castle of Reggio.