Rangers and Outlaws: Two accounts of the Old Texas Frontier—Six Years With the Texas Rangers, 1875 to 1881 by James B. Gillettt & Life and Adventures of Sam Bass the Notorious Union Pacific and Texas Train Robber by Sam Bass

Home » Rangers and Outlaws: Two accounts of the Old Texas Frontier—Six Years With the Texas Rangers, 1875 to 1881 by James B. Gillettt & Life and Adventures of Sam Bass the Notorious Union Pacific and Texas Train Robber by Sam Bass 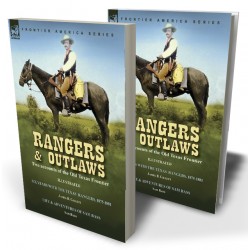 James Gillett was born in Austin, Texas and made his living as a cowboy before joining the Texas Rangers in Company D, assigned to the notorious West Texas borderlands. This was untamed country and besides dealing with outlaws, the rangers had numerous fights with hostile Indian tribes of the South-West including the Kiowa, Apaches and the Comanches. Gillett was involved in putting down the Mason County War and Horrell-Higgins Feud. In 1878, he was also involved in hunting for and the eventual killing of the Train Robber, Sam Bass, one of the infamous badmen of the Old West. There are adventures in quantity within the pages of this excellent book as Gillett recalls the pursuit of hostile Apaches who had attacked a stagecoach, how he killed outlaw Dick Dublin in a gunfight, became an El Paso deputy- marshal with gunfighter Dallas Stoudenmire and more. Since Sam Bass was a significant incident in James Gillett’s long career as a ranger, an account of his career is also included in this unique Leonaur edition.

The Mexicans dismounted and started up the mountainside about one hundred yards to our left. Lieutenant Baylor and his eight rangers marched straight forward from our horses and began the ascent. As we went along the lieutenant pulled some bunch grass and stuck it all around under his hat band so his head would look like a clump of grass and conceal his head and body if he should have to flatten himself on the ground. He counselled us to follow his example. I had taken some Mexican cheese out of my saddle pockets and was eating it as we marched carelessly up the mountain.
Honestly, I did not believe there was an Indian within a hundred miles of us, but it was not long before I changed my mind. Suddenly there came a loud report of a gun and then another. I looked up to where the Mexicans had taken position behind a ledge of rocks and saw where a bullet struck the stones a foot above their heads. I did not want any more cheese. I threw down what I had in my hand and spat out what I had in my mouth.
These old Apache warriors, high in the cliffs above us, then turned their attention to our little band of eight rangers and fired twenty-five or thirty shots right into the midst of us. One of these big calibre bullets whizzed so close to my head that it made a noise like a wild duck makes when flying downstream at the rate of fifty to sixty miles an hour. Lieutenant Baylor ordered us to charge at once.
In running up the mountain I was somewhat in advance of the boys. We came to a rock ledge three or four feet high. I quickly scaled this, but before I could straighten up an Indian rose from behind a rock about fifteen to twenty yards ahead and fired point-blank at me. The bullet struck a small soap weed three feet in front of me and knocked the leaves into my mouth and face. I felt as if I had been hit but it was leaves and not blood that I wiped out of my mouth with my left hand. I turned my head and called to the boys to look out, but the warning was unnecessary—they had already taken shelter under the ledge of rock.
Just as I turned my head a second shot from the Apache carried away the entire front part of my hat brim. I saw the warrior throw another cartridge in his gun and brought my Winchester quickly to bear upon him. When he saw that I was about to shoot he shifted his position and turned sideways to me. We both fired at the same instant. My bullet hit the redskin just above his hip and, passing straight through his body, broke the small of his back and killed him almost instantly. This old brave was a big man, probably six feet tall, with his face painted in red and blue paint. He used an old octagon barrel Winchester rifle and he had with him an old shirtsleeve tied at one end in which were two hundred and fifty Winchester cartridges.
Some Indians fifty yards up the mountain now began to shell our position, so I took shelter behind the ledge of rock. Fifteen or twenty feet to our left and a little higher up the mountain, Lieutenant Baylor was sheltered behind some boulders. He raised his head slightly above his parapet for a peep at the Indians and those keen-sighted warriors saw him; a well-directed shot cut part of the grass out of his hat. Had the bullet been six inches lower it would have struck him full in the face.
“Darn that old Indian,” exclaimed Baylor, ducking his head. “If I had a shot gun I would run up and jump right on top of him.”
The lieutenant was mad now and ordered a charge. The boys hesitated, and George Harold, an old scout, said, “Lieutenant, if we leave this shelter and start up the mountain the Indians hidden behind those rocks seventy-five yards above will kill us all.”