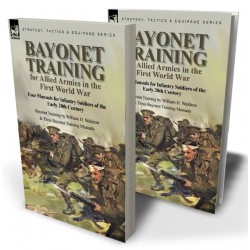 Fighting at close quarters in the battlefields of the trenches

This unique Leonaur volume brings together four interesting training manuals for infantry in close combat with the bayonet during the First World War. The first is a Canadian publication, the second and third American, whilst the fourth concerns the British Army. To be clear, there are inevitably similarities between the methods described in these manuals. However, for any reader requiring information reliably attributable to a particular army of this period these publications provide clarity and verification. All the texts are accompanied by numerous line drawing or photographs. Particular attention is paid to fighting at close quarters with an enemy within a trench system. These manuals will be of use to illustrators, military modellers for dioramas and figures , military re-enactors, museums and theatre and film production companies.

The sound, well-established tactical principles of the employment of infantry are today unchanged, but the present European War, (1918), has changed somewhat the application of those principles. Two long opposing lines, with flanks absolutely secure, make any large enveloping movement; impossible, and any attack, great or small, local or covering great areas, must be purely frontal.
The underlying idea of all infantry tactics is to close with the enemy as soon as possible and with all the units well in hand. The ideal conditions would be those making possible a quiet, quick, and orderly advance without halting to open fire, but this is impossible with the highly developed weapons of today, and even though some of the attacking infantry managed to close with the enemy, there would be too few left for a bayonet fight. Therefore, in order to make a successful assault, the infantry must move up under covering fire.
To provide this protecting fire, it has equipped itself with the pistol, bayonet, and high-powered rifle, the 1-pounder, trench mortars, the effective hand and rifle grenades, and has called to its assistance its supporting arm—the artillery. The enemy, attempting to protect himself from the terrific fire that he knows will precede the infantry attack, has prepared deep dugouts and bombproofs, in which he often hides until the last possible minute.
Despite the fact that all of the above preparations are simply to give the bayonet man a chance to use his weapon (and to kill as many of the enemy as possible while doing it), it follows that fire action is more important than shock action, for without the fire the shock would be impossible. Therefore, the bayonet men must know how to shoot their rifles and to cooperate with the machine gun, the grenade, and the artillery, and must be so formed that during the assault they can deliver an effective rifle fire, present a solid front to the enemy in the bayonet charge, and be close enough together to furnish mutual moral and physical support.
The wave attack that has been used so much in France was produced in order to furnish the greatest amount of mutual support among automatic riflemen, grenadiers, the 1-pounders, and riflemen, and at the same time to allow the greatest number of riflemen (bayonet men) to close with the enemy in the best formation possible. All of the conditions so far discussed make it imperative that the assaulting troops be perfectly organised, and that they follow their covering fire (barrage) as closely as possible.
As indicated above, the defenders are forced to retire to their dugouts, where they may easily remain too long. An attack has the best chance of succeeding when it can meet the defenders emerging from their dugouts, but if the assaulting troops are met by the defenders on their own parapet, the assault will probably fail. Thus a few seconds will turn the scales, and for that reason the assault must keep moving forward. If firing is possible, it must be done from the shoulder or hip while advancing.
The men must rise from the starting trench as one man and advance as one man. Thereafter the advance continues at a steady walk, except for the last 30 or 40 yards before reaching each trench, when the line breaks into a slow double time, finishing up the last few yards at a run and without yelling. This favours the surprise element. Once in the enemy’s trench, shock action is impossible, and it is merely a question of our ability and will to use the bayonet.