Hobo Roads: Two Accounts of Living Rough in Early 20th Century America—The Adventures of a Woman Hobo by Ethel Lynn & From North Carolina to Southern California Without a Ticket by John Peele

Home » Hobo Roads: Two Accounts of Living Rough in Early 20th Century America—The Adventures of a Woman Hobo by Ethel Lynn & From North Carolina to Southern California Without a Ticket by John Peele 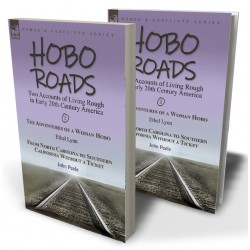 This unique Leonaur book contains the personal narratives of two people, a woman and a man, who share with readers their experiences of life on the road and railroads in early 20th century America . Here are two engaging accounts of travelling with empty pockets. The first narrative follows the adventures of a female doctor who in 1908 in Chicago was diagnosed with tuberculosis and advised—for the sake of her health—to return to the warmer climate of California. Despite losing her income and being in financially dire straights she determined not to surrender to her illness. This dauntless lady set off with her husband, who had been ruined in the Bank Panic of 1907, on her epic journey riding a tandem bicycle. The second account by nineteen year old John Peele, an asthmatic, recounts his journey from Tarboro, North Carolina to California and several points in between in 1906.

I listened appalled. I knew the attitude that some farmers maintained towards tramps, and I trembled for Dan’s safety. The racket increased in violence. I became frantic and determined to go to the rescue. Unstrapping the hatchet from the handle bars, I slipped the thong about my wrist and plunged under the railroad fence and across the field, determined to take a short cut to the scene of combat. Worming a difficult passage through a barbed wire fence, I came to a black, sluggish creek or strip of mud perhaps eight feet wide, bordered by a thick row of trees, whose branches hung low over the surface. An extremely stout barbed wire fence stretched at right angles across this stream and joined a similar fence on the farther bank. I paused on the brink, for the black, slimy surface was repellent. The outcries redoubled and from where I stood whole sentences became intelligible.
“Come on now, you . . . son of a gun! Get out of that gate, you. Oh, if I could only reach you with a club. I’ll shoot your hide full of holes in about a minute.”
I gazed anxiously up and down. My only course was to wade across. Grasping the hatchet firmly, I swung my arms, made a little run, a jump and plunged in. Down, down I sank, deeper and deeper. I laboured furiously to reach the further bank, but my struggles only increased the rapidity with which I sank. The thick, black slime rose higher and higher about me. I tried to scream, but my parched lips could utter no sound. We have no quicksands or sloughs in my home country, but I have read of such places and heard of horses and cattle and sometimes human beings going down, never to be seen again. I thought of Dan escaping from the fanner and returning to find the abandoned wheel. Of his wife, there would be no trace. My end would always remain a mystery. As the black mud sucked me down, I could imagine it rising to my chin, my lips, my nostrils. I could picture the inky surface closing over my head, shutting out the sunlight forever.
In a frenzy, I threw my arms above my head. The blade of the hatchet caught over a bough. Cautiously I pulled. It held firm. A gleam of hope illumined my dark despair. Grasping the handle with my left hand, I tried to lift myself out, but the slough refused to give up its victim so easily. The blade slipped a little. My heart seemed to leap from my body. My senses reeled. Fiercely I called on all my forces of reason, will and self-control.
Placing just enough weight on the hatchet handle to prevent my sinking deeper, I studied the situation calmly. My one hope lay in securing a firm hold on the large branch above.
Little by little I began to spring the smaller shoot up and down. Harder and harder I pulled on the hatchet, at the same time forcing the blade firmly over the limb. The leaves swung closer and closer. Emboldened, I worked harder than ever. At last I was able to abandon my hold on the hatchet and secure a firm grip with both hands on the tough wood.
But the slough dragged me down with a grip like an octopus. A ton weight pulled at each foot, my skirt seemed grasped by a thousand clutching hands. And then I gave thanks for my broad shoulders, and for the violent exercise of steering the tandem, which had developed the sturdy muscles of my hands and arms. Slowly, slowly I made headway against the treacherous depths; slowly, slowly, the vicious grip was broken, till with a gasp of relief I draped myself out upon the bank.
I sank down exhausted.
Then from the farmhouse the undiminished sounds of conflict forced themselves into my consciousness and suddenly I burned with a reckless berserk rage against the whole world.
Springing to my feet, I hurled myself upon the barbed wire fence that crossed the slough, and clinging with hands and feet to the thorny strands, edged my way across. Skirt and stockings were torn in a dozen places. My heavy coils of hair slipped down. My hands bled profusely. Forcing my way through the second fence, I started across the meadow. As I rounded a clump of bushes a large red bull, with head to ground and pawing hoof, barred my way. But I was far past caring for such as he.
Snatching up a stick, I began clapping wood and hatchet together and charged directly at his lordship. He stood his ground till the hatchet was almost touching his nose, then, with a bellow of fear, turned tail and raced across the field with me in close pursuit. Gaining the fence, I tumbled over and arrived panting at the back of the farmhouse.
In a beautiful kitchen garden, a farmer stood as though rooted to the ground with amazement at my grotesque appearance, as with hands and face streaked with blood, clothing in shreds and bedraggled with mud, I stood before him with a club in one hand and a hatchet in the other.